The interior design world was not built on elitism. Nomadic Mongolians of all social statuses in the 5th century BC employed decorative carpets in temporary abodes for comfort and style; ancient Egyptians spruced up their simple homes with skins and fanciful objects; and some early Asante residential architecture was built with walls decorated with animal designs. However, it was the elite class with means (traditionally royalty and religious leaders) who were able to outfit whole rooms or palatial complexes that brought about the necessity for the professional role of interior designer. Today, the interior design world has continued to be an elite profession, often available to the wealthy few through lineage, expensive education, and opportunities fed via nepotism or connections to the same wealthy clients that originated its need.

Along with systematic racism, the history of interior design is important to understanding why disenfranchised people have historically been excluded from pursuing the profession. Since the death of George Floyd on May 25 launched new momentum for the Black Lives Matter movement in the United States and anti-racist protests around the world, companies across many industries have pledged their support for anti-racism, some for fear of a reckoning about their own practices in diversity, inclusion and equity. In the United Kingdom, interior designers Sophie Ashby and Alexandria Dauley have teamed up to hold their industry accountable. On July 8, the duo (who both run their own interior design studios, Studio Ashby and Dauley Design, respectively) launched United In Design, a pending nonprofit with the mission to address its lack of diversity, specifically the underrepresented Black, Indigenous, people of color and low socioeconomic communities in the profession.

“I am in the minority certainly in the interior design world; there are just not very many Black interior designers practicing in the UK,” says Dauley. “I felt that we could address this relatively simply just by opening up the profession, educating ourselves as to why these problems exist in the first place, and going to these underrepresented communities and saying, ‘we want to hear from you; pursuing a career in design is an option for you.’” Similarly, Ashby had been looking for ways to diversify the pool of talent from which she was hiring. “I could count on my fingers the number of applications that we have had from young Black designers over the last six years,” she says. “So there is clearly a bigger problem upstream in interior design not being an appropriate career for someone of color. Perhaps they’re not aware of it; it’s not being promoted or more likely a young Black teenager might not look at our industry and think that there is space for them in it because they are not seeing themselves reflected there.”

After circling each other in their lines of questioning with colleagues, the two were finally introduced and their seven-point actionable initiative was born. To join the pledge, design businesses or individuals (including interior design but also furniture and industrial design) must commit to three of seven points, which were designed themselves to be fiscally inclusive. They range from low-lift items like using your platform to promote and support diversity to buying into formal diversity training or mentoring training that will support a mentee match program. Dauley cites having a mentor as crucial to her path to interior design directly out of design school; United In Design will provide these guides to budding designers, as well.

The charity will also address the uneven playing field phenomenon that in order to get a job, you must have prior job experience, something that the duo found, through their initial research, was a large barrier to entry for people from diverse backgrounds in design school. United In Design has teamed with fellow nonprofit Interior Educators, which accredits interior design programs in over 50 education institutions in the UK, to create a three-month apprenticeship program whose recipients will be chosen via a brief-based competition. For those design firms that choose to participate in the program as part of their pledge, talented students will gain direct work experience in their studios and be paid a junior designer wage.

A paid opportunity for entry-level work experience is a very important factor for emerging designers of low socioeconomic status, but so, too, Dauley found, is anti-racism in a prospective employer. Speaking with young designers of color about their experiences interviewing for their first jobs, she found that in many cases blatant racism barred them. “Some people said there was a look of surprise when their name was called and the design firm realized that it was a Black person that had applied; someone else told me that they were told in the interview that they were really looking for someone who is the face of the brand and then never heard anything back,” she recalls. “And then there was another that was really shocking where she was asked to interview, went to interview, felt the interview went well but then was told immediately, ‘sorry there is no position.’ A white friend called the same studio the day after and was told, ‘of course there’s a position; we are desperate for someone.’” A Black designer herself, she says that she has not experienced this kind of discrimination herself, but also notes that she has made her entire career self-employed. It’s clear, both she and Ashby agree, that industry change is desperately needed.

The goal for this year was 50 sign ups, however, so far, approximately 100 design firms or individuals have taken the pledge and several more emerging designers have reached out to participate in career advancement. In October, when United In Design will officially be registered as a nonprofit (a charity in the UK), it will begin accepting donations from pledging firms and kick-start the funded programs in 2021. Accountability will come in the form of biannual follow-up with all parties.

That this initiative was born during a pandemic was crucial to its accelerated timeline, says Dauley. “Because normal life came to a really abrupt halt, people were able to take the blinders off and look around,” she explains. “You don’t see Black people in the design magazines at the level that the prestigious white designers are at. We need to be opening up these design practices because if you want to be the best you need to train with the best. Given the same opportunities, you will see people of color rise through the ranks.” Ashby concurs: “I think that with what we are doing, in many ways, it will be easy to look around in three years time and get a sense of how far we have come.”

‘I can’t believe this came out of it’: A Provincetown guesthouse gets reinvented as a single-family

Thu Aug 6 , 2020
Wife-and-husband architectural team Mette Aamodt and Andrew Plumb rendered the vision a reality. The duo realized that scooping out the shell, including the second floor and attic, would leave exactly what Jacobs and Ganz were looking for. “There are two gabled roof forms, one that runs east-west and another that […] 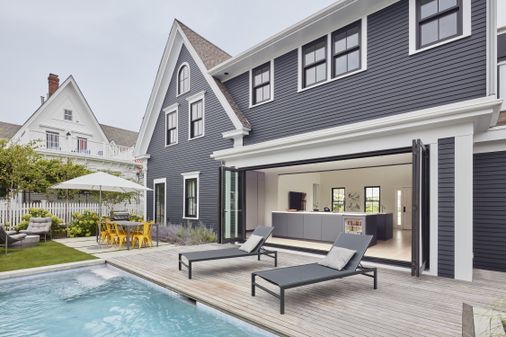