As Tate Modern and Britain prepare to open their doors on Monday, we asked great British artists to tell us what works they’ll make a beeline for when they get into the galleries.

I’m looking forward to seeing the Constables and Turners, the Blur and Oasis of 19th-century painting. I always construct an involuntary standoff between the two; do I see the world this way or that way? Which is more sympathetic to my sensibilities? This is all nonsense of course, they are both uniquely impressive and the Tate is a broad church celebrating multiple perspectives.

The exhibition that I am really looking forward to seeing is Andy Warhol at Tate Modern. Never has an artist managed to comment so directly, succinctly, effectively, creatively and aesthetically on American society and politics. I have seen many Warhol shows over the decades, but it seems that now is a particularly pertinent time and a moment where his work will resonate. I look forward to seeing the show with the current state of America in mind.


I long to stand in front of the Turner watercolours, to be lured into their transformation of liquid colour and gentle touch into sun, moon, sky, sea and land.


It’s impossible to choose one work. I’ve loved Tate since being an art student in 1952, so when I had some time to kill in London 5 years ago, where to go… I drew pieces I fancied at Tate Britain, so this response is based on that memory, not necessarily the facts. But the memory and response to that memory is what proves its significance for me. Rachel Whiteread’s Bath was dark and loveable and undecorated, made in pieces, and fitted together with obvious shadow-joins and a great non-bath surface. Surreal. I’d like it in my bathroom. And her Untitled (Floor/Ceiling) in orange rubber is still on display now and I’m looking forward to seeing it again soon. I like moulds, pouring-in and tipping-out — it depends what you do with it, but her work turns out good.


We are all hungry for presence in our virtual worlds, so it is hugely welcome that Tate Modern and Tate Britain are reopening and I look forward to reacquainting myself with old friends. I’m excited to see the Rothko Room returning to Tate Britain’s rehung Clore Gallery in a dialogue with Turner. I saw the Seagram murals not so long ago in the Kunsthistorisches Museum in Vienna in an overly illustrative relation to the architecture of Michelangelo’s Laurentian Library. As much as this was an internalised inspiration for the paintings, Rothko’s regard for Turner suggests that this will be a more sympathetic and fascinating encounter.


Paul Nash’s work has always been a particular reference point for me. Paintings at Tate Britain such as Landscape at Iden 1929 and particularly Equivalent for the Megaliths 1935 are relatively small, but never fail to stop me in my tracks. Somehow Nash represents the origin of a particular trajectory that I feel I’m part of — I can see a vision beyond the era into which he was born. In his paintings I lose the medium and I am aware of the language of sculpture and their environments, or what we now call installation. It reflects upon the specific politic and resultant horrors of his epoch but imagines a visual poetry that foresees and becomes part of a possible route out. That route, and its particular sense of British modernism is now truly at an end. It is left to us to reflect and plan in the face of its demise, and to make from the debris of our own past and psyche a better future for us all, as Nash did. That is why I shall be returning to Tate Britain.


The most joyous and beautiful artwork in Tate Modern is Matisse’s paper cut out L’escargot. I long to see this great old friend again. It’s about chance; chance encounters between colour. It says nothing but fun. It’s modern, it’s musical and it’s playful. During Covid I have been oddly productive making images of the Thamesmead Estate and transcribing conversations with residents. I have made 15 hours of Radio for Resonance FM and artworks like L’escargot are inspirational. It was made at the end of Matisse’s life, when he was ill and knew he did not have much time left but he made this work. It’s almost as if it’s for children. Its says HELLO from one old man about to leave the scene to the next generation. In the time of Covid it’s an oddly resonant image.


In this time of social distancing, Tate’s Performer and Participant display highlights so many questions around collective and individual actions. One piece in particular, by Edward Krasinski, Untitled 2001, consists of 12 suspended mirrors of equal size — a continuous line of blue tape runs along the walls and the surface of each mirror. It integrates the mirrors with their surroundings, erasing the difference between real and reflected space, literally creating a museum without walls. It’s so important to be able to still have an immersive and interactive experience that can disrupt your perceptions of space, whilst still maintaining social distance. In Krasinski’s Intervention series (1969–70), the use of lines marks the alienation of measure from the measurer.

Then there’s Fons Americanus by Kara Walker, which takes the form of a public fountain and is hugely significant in the wake of the most recent global Black Lives Matter protests. It confronts monuments that celebrate colonial histories in both the US and UK, questioning how these traumatic histories are now celebrated. It asks directly, how can we see the monuments in our public spaces in a new light?

It sends a message globally that Black Lives do matter and we will not condone racism or any racist acts in any forms whatsoever. It is a powerful reminder to us all the history of violence against Black people of Africa and its diaspora that is often unacknowledged.

Sat Jul 25 , 2020
As the saying goes, well-behaved women seldom make history. And one particular woman-behaving-badly, eccentric socialite and arts patron Rebekah Harkness, surely would not have made pop music history as the inspiration for track 3 on Taylor Swift’s critically acclaimed new surprise album, Folklore, if she hadn’t gotten up to so […] 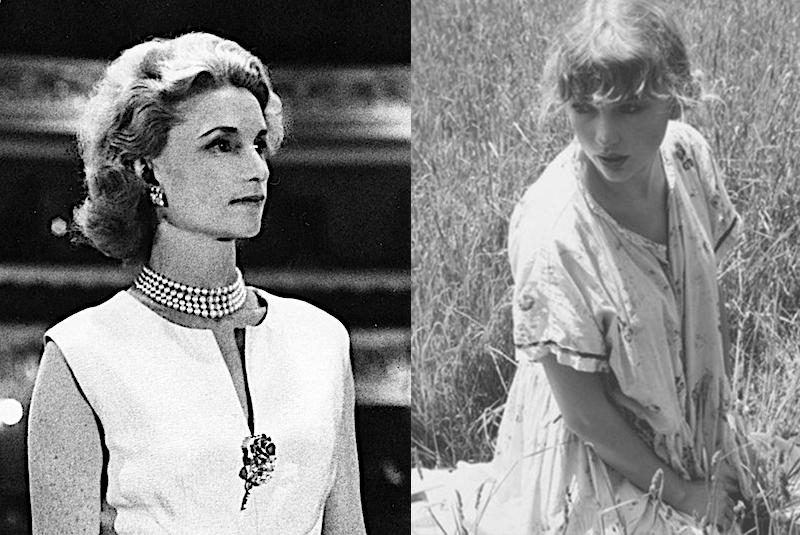