Whoever coined the phrase “you can’t go home again” clearly never lived through a 21st-century pandemic.


As unemployment ranks grow and colleges continue to push distance learning, young adults are squeezing back into their childhood bedrooms in unprecedented numbers. Families accustomed to living apart are suddenly thrown together again, and are facing a host of spatial—and financial—complications as a result.

“I joke and say we have a WeWork at our home address,” says Lynn Pollack, a Scarsdale, N.Y. resident who had to quickly re-acclimate to life when her 21-year-old daughter came home after her college closed in the spring, and her 23-year-old son’s plans to move out were derailed by the pandemic.

With Pollack running her insurance business out of the family room, her husband doing his finance job from the one designated home office, son—who works at a wealth management firm —in the guest bedroom, and daughter in the living room trying to coordinate a move back to her off-campus apartment in Atlanta, it’s been a dramatic shift from pre-pandemic life.

Pollack’s daughter is back in Georgia now, an area rife with mask-deniers, but Pollack isn’t confident she’ll stay there for long.

“For the last six months she’s been living in a state where people believe the virus is real,” Pollack says. “We’ll see what happens.”

Pollack has a lot of company — both at home and demographically. According to the online real estate platform Zillow, 32 million Americans were living with their parents (or grandparents, in a few instances) as of June, up 10% from a year ago. In March and April, 2.2 million adults between the ages of 18 and 25 moved back home.

“One is the pure economics of a recession,” he says. “A large number of young adults, especially, have been laid off or lost income, so they’re moving back home.”

The second factor, Tucker says, is the sense of security they crave in an increasingly unstable world.

For some, that security comes with a price tag.

A new kind of money talk

The cost of adding a few more burgers to the grill, or switching to a faster internet plan that can accommodate a couple more laptops, might seem nominal to some families. But even small expenses can wield a powerful blow to parents’ finances.

“Both the parents and the adult children …. go into it thinking they have the home, they have the space,” says Christina Newberry, author of “The Hands-On Guide to Surviving Adult Children Living at Home.”

“The most common mistake is not planning and not thinking about what those extra costs may be,” she says.

At the start of the pandemic, spending every day at home helped Pollack and her husband save money on commuting, dining out, and other costs. Then they added two more people to the household, and expenses skyrocketed.

The couple made a few big-ticket purchases — like patio furniture to make working and relaxing outside easier when space constraints wore on them. And lots of little purchases.

“The groceries definitely went up,” Pollack says. “When it was just my husband and I, I barely went to the supermarket. Now, everybody’s home, nobody’s going out to eat and every meal is at home. Before, maybe we were spending maybe $400 a month. Now, we’re probably spending $1,000 a month.”

Most parents don’t mind covering these types of expenses, so long as they have the means. But as the pandemic stretches into fall, budgets are wearing thin. The difference between a “need” and “want” isn’t always cut-and-dry, and questions loom in the gray area. Do you buy noise-canceling headphones for the college sophomore who’s cramming for exams in the same room that her brother’s trying to make sales calls? The computer software she once got for free at her university library? How much should you be spending on toilet paper and hand soap these days? What about emergency expenses?

“If you live with your parents, your parents do things for you, even if it’s by default,” says Paul Isom, a lecturer in the English department of North Carolina State University whose 18-year-old son came back home when his campus shut down in the spring — and whose car got totaled by a driver who crashed into it in the family’s driveway not long after.

Since his son is no longer living on a pedestrian-friendly campus, “We had to kind of scrape together for a new car,” Isom says. He contributed “a couple thousand dollars” towards his son’s next vehicle in hopes that it will be the last big bill he needs to foot.

“We’ve already been broaching the idea that he might want to think about going back to campus in the spring,” Isom says.

Establishing boundaries — and an exit strategy

When mom and dad are suddenly back in control of an adult child’s purse strings, it can blur the lines of traditional parent-child boundaries.

“There is a power dynamic that goes on, and it’s the people who have the greater financial resources, typically— and fairly—who have the greater power over decisions, especially around things that are not true necessities,” says Susan Zimmerman, a financial consultant and family therapist in Apple Valley, Minn.

Old habits die hard — and like many of us who have retreated to our favorite sweatpants and comfort foods this year, some young people are also finding comfort in returning to The Way Things Were. Same goes for their parents.

“It’s an opportunity I thought I was never going to have,” says Sandra Silva, a nurse in Westchester County, N.Y., whose 27-year-old son, Joshua Clark, has been living back at home with Silva and her husband, Clark’s stepfather, since March. “I never thought I’d be living with him again, so to have him move back was very nice.”

While parents are often reluctant to do so, experts like Zimmerman and Newberry say charging an adult child rent—even a small amount—can mitigate the toll higher expenses might have on parents’ bank accounts, and motivate their kids to start thinking about an on-ramp back towards independence.

None of the families Money interviewed for this story say they’re asking their children to pay rent (Most cited the rising price of real estate and a desire for their kids to put money towards a down payment on a house, or another financial goal.). Many do say, however, that the pandemic has helped initiate ongoing family dialogues about money.

“It presented a good opportunity when he was home to have some focused conversations on budgeting,” says Nick Schultheis, whose son moved back home to Minneapolis in March when his college shut down and his job as a junior football coach disappeared.

“He had been supporting himself … and all of a sudden it became necessary for me to help him with funding,” Schultheis says. “I think that’s helped him now, as he’s going forward, to be on top of what his costs are.”

Fri Sep 25 , 2020
Amazon is offering its Rivet Modern Media Cabinet for $192.96 shipped. Today’s discount delivers $107 in savings and beats the lowest price we have tracked by $32. This unit features a white finish paired with dark wood to usher in a striking design. Owners will find a total of three […] 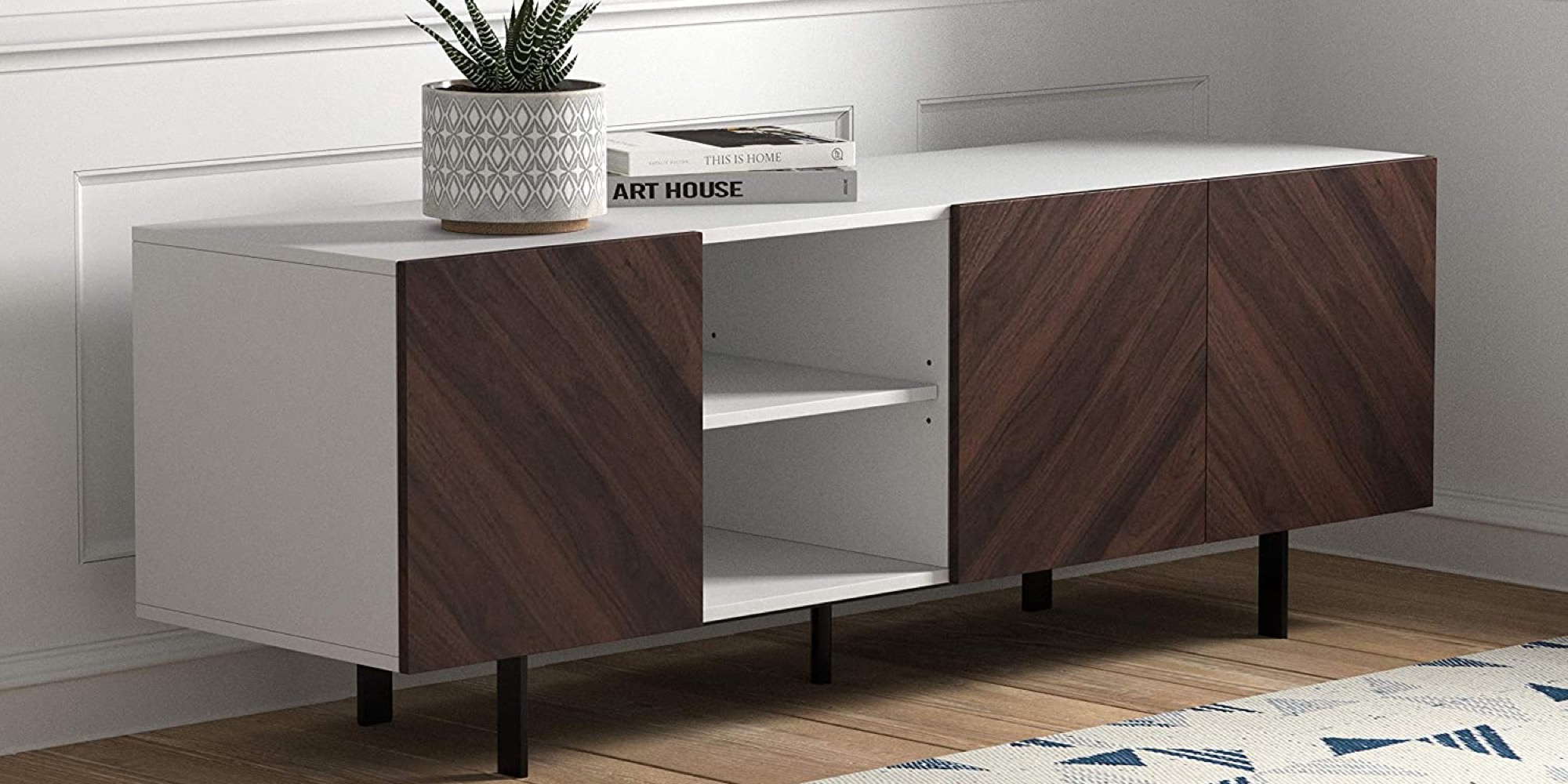