Meghan Markle offered royal fans a glimpse into her new dream $14 million Californian mansion during an appearance at a virtual conference yesterday.

The Duchess of Sussex, 39, joined the online summit for a one-on-one chat with Fortune editor Ellen McGirt, where she claimed she pays no mind to public ‘flattery or criticism’.

Meghan spoke from her sprawling nine-bedroom and 16-bathroom mansion in upscale Santa Barbara which she shares with Prince Harry, 36, and their son Archie.

The mansion is known as ‘The Chateau’ for $14.65million on June 18, making them neighbors with celebrities Oprah Winfrey and Ellen DeGeneres, according to DailyMail.com.

While Prince Harry and Meghan have provided occasional glimpses into their home over the last few months, the former actor’s appearance from her plush living room sofa offered royal fans another glimpse into the lavish Montecito mansion.

Her appearance offered a sneak peek into the private life of the Duke and Duchess and the objects and personal treasures they hold dear including feminist titles and books on race. 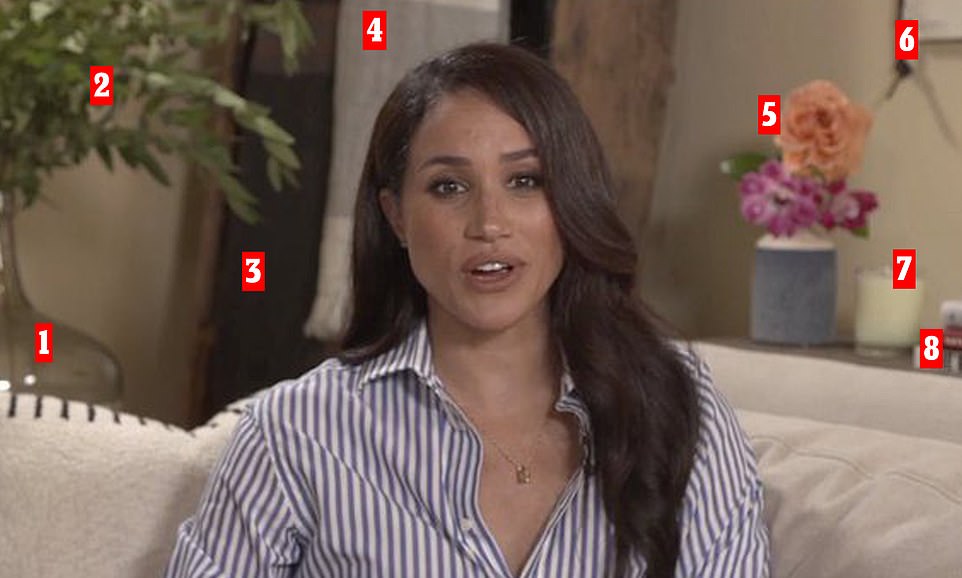 Meghan Markle, 39, offered royal fans a glimpse into her plush and lavish living room in her new dream $14 million Californian mansion during an appearance at a virtual conference yesterday

From the small glimpses of her home Meghan has revealed so far, the Duchess has filled the space with ornamental vases and blooms of flowers.

The interview yesterday was no different, with the royal placing a large clear statement vase on the left hand side of the frame.

The eye-watering costs of running their home

The Sussexes took out a multi-million-pound mortgage to buy their spectacular home.

Sources say the couple are ‘proud’ to have bought the home without help from family.

Deeds show they took out a £7.25million mortgage to be paid back, plus interest, by 2050 – indicating they put down a deposit of around £3.8million.

This is on top of the cost of maintenance, cleaning, staff and security and utilities which could run into tens of thousands of pounds a month.

The couple are also paying back the £2.4million spent on renovating Frogmore Cottage in £18,000-a-month instalments.

It is not clear how the duke and duchess will pay for all of this. When they quit royal duties they made a point of stressing that they wanted to become financially independent

Meghan and Harry have also accentuated the greenery of their new gardens and outdoor areas with a huge plant in the corner of their room.

The large bloom of decorative grass is just one of several plants in their new home, with the bending grass dipping into the corner of Meghan’s camera frame.

A large shabby chic wooden cabinet could be seen directly behind Meghan in the shot during the interview.

During an appearance last week, the Duchess hinted that she could be looking to industrial style interiors when decorating her new home by showcasing the design hardback Wood And Iron: Industrial Interiors on her sideboard.

The book offers a guide to those wanting to decorate their home in the distinctive style.

According to it’s online description, it allows readers to dip into the world of industrial style, ‘presenting the most influential names in the genre, anonymous pieces salvaged from junk shops and carefully selected interior design projects.’

The Duchess appeared relaxed as she lounged on a huge white sofa with a variety of monochrome scatter cushions during the interview.

Her lavish home shows her love for white furnishings and luxury accents such as the grey striped throw placed in the corner of the frame.

The royal had a very similar item while filming Suits and living in her Toronto home, and often placed a grey striped throw, from the luxury textiles brand Pamuk and Co, across her white sofa.

The brand specialises in traditional Turkish ‘towels’ made from high quality cotton, that can also be used as shawls, yoga mats, throws and baby mats and sell for a very reasonably 50 Canadian dollars or around £30.

On the royal’s sideboard, a small posey of colourful flowers placed in a blue vase can be seen.

The trio of pink and orange blooms add a bright splash to the neutral scene.

The Duchess has long favoured mid-century modern furniture and a white colour palette, and added vibrant pops of colour with accessories such as a huge bouquet of flowers.

Meghan has always been a fan of fresh flowers,  with pink peonies declared as her favourite.

But rather than being a gift from Harry, she has revealed that she regularly treats herself to her favourite bouquets. 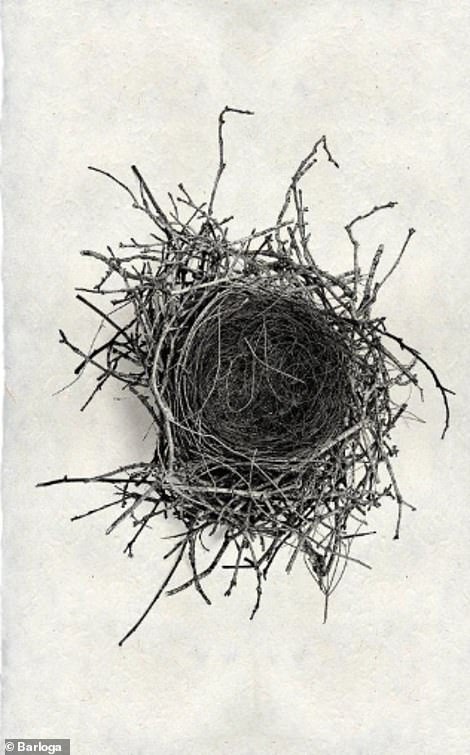 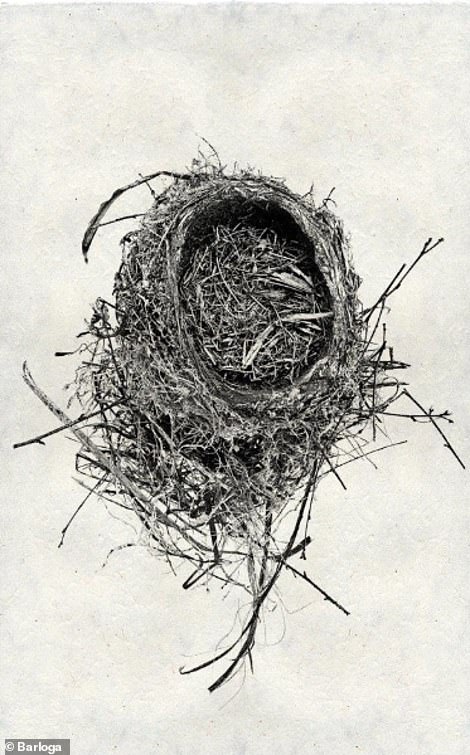 A large piece of monchrome artwork can be seen directly behind Meghan’s shoulder, which feature a bold black-and-white design.

The print is one of three  from Californian Barloga Studios, a photography and print studio owned by father-son duo Dennis and Roy Barloga.

The brand specialise in ‘nature’ images, with the Duke and Duchess selecting three of the Nest Studies prints, which cost $360 each, for their living space.

The three frames on show in Prince Harry and Meghan’s home are likely snaps taken by Roy, who specialises in  infrared photographs and is best known for his series of ‘trilogies’ that span a wide variety of subjects.

According to their website, the duo are currently combining their talents to ‘make prints on a variety of ‘unphotographic’ substrates’ including handmade paper, film, wood, and fabric.

The couple have framed their huge nest prints in the brand’s  frameless leather and steel hangers which are described online as ‘offering an easy and inexpensive way to display our prints without the hassle of custom framing’.

Directly behind Meghan’s right shoulder, a large white candle can be seen decorating a sideboard.

While the couple appear to have scented their home with fragrant candles, they have also decorated with the accessories to create some ambiance in the room. 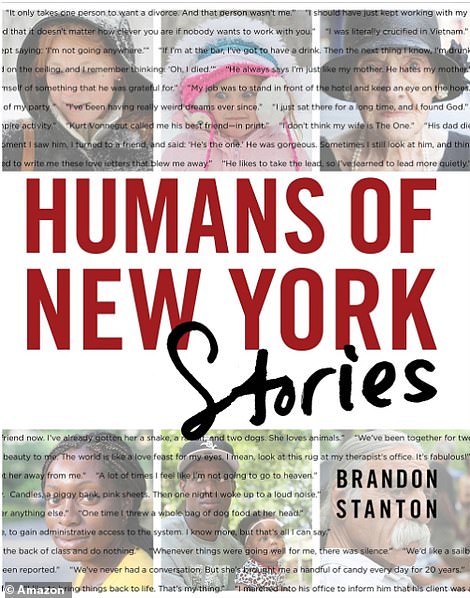 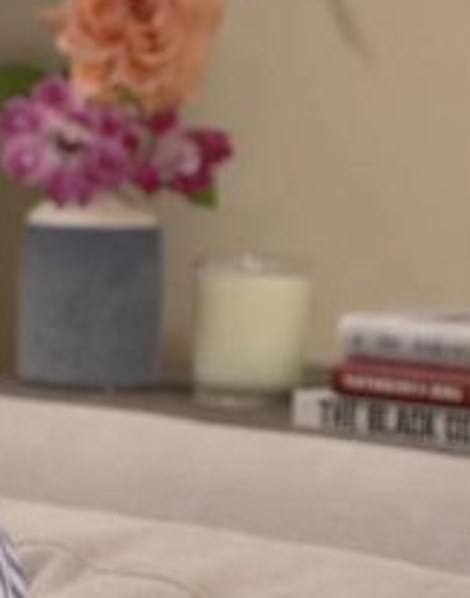 Meghan and Prince Harry’s reading taste can clearly be seen displayed to the right of the image, where there is several books perched in a decorative pile, including Humans of New York by Brandon Stanton and The Black Godfather

Meghan and Prince Harry’s reading taste can clearly be seen displayed to the right of the image, where there is several books perched in a decorative pile.

One of the books on show is the Humans of New York photograph book by Brandon Stanton, which features a collection of portraits of residents of the city taken.

Stanton began the project back in 2010 in the hope to create a ‘photographic census of the city.’

The images are accompanied by quotes, anecdotes and stories from each of the individuals.

Among the books on show is  The Black Godfather, which is a 2019 documentary film directed by Reginald Hudlin, released on Netflix, depicting the story of music executive Clarence Avant, told by the people he worked with.

He is known as ‘the godfather of black music’ and very famous in the music industry.

Starting as a manager to pianist-composer Lalo Schifrin, he later founded record labels, served as concert organizer, a special events producer, a fund-raiser for Democratic politicians, and a mentor to several African American exec.

The book could be seen as a nod to Netflix, which the Duke and Duchess signed a megawatt deal with the media giant.

Prince Harry and Meghan announced a new deal with the streaming service earlier this month, and said they wanted to provide ‘hope and inspiration’ with their upcoming projects.

The style is very similar to the interior of Meghan’s Toronto home, where she lived before joining the royal family.

Despite having two dogs with muddy paws, the then-actress bravely opted for a white couch in her living space with a grey striped throw from the luxury textiles brand Pamuk and Co.

Her dining table was white marble and she placed a full length shabby chic vintage mirror resting on the wall behind it to create the illusion of extra space.

While the star has long favoured mid-century modern furniture and a white colour palette, she added vibrant pops of colour with accessories such as a red striped rug in the hallway.

She has also always been a fan of fresh flowers, especially pink peonies which she has declared are her favourite.

But rather than being a gift from Harry, she reveals that she regularly treats herself to her favourite bouquets.

She’s a fan of a scented candle, including Diptyque’s Figuier with fresh wood, green notes and crushed fig leaves and the Le Labo Santal 26 Classic Candle, £51, with ‘gentle, smokey and leathery tones’.

Meghan is also appreciates fine art, and had a print of one of fine art photographer Gray Malin’s birds’ eye view beach vistas on the the wall of her living area.

Above the bed in the guest room hung a figure study watercolour by New York based artist and illustrator Inslee Fariss, estimated to have cost $650 (£520).

In her own room, Meghan’s bed frame was an oversized wrought iron birdcage design and she continued her white theme with the curtains and bedding.

Meghan artfully arranged her books around the house, turning them into design features by perching them underneath jugs of flowers.

The entrance to the property opens onto a wide lane paved with hand-cut Santa Barbara Stone that leads through a grand archway of trees to the main residence, according to Zillow.

It also boasts a two-bedroom, two-bath guest house, perfect for Meghan’s mother Doria, who is acting as one-year-old Archie’s nanny. Doria has already been to the house, TMZ reports. 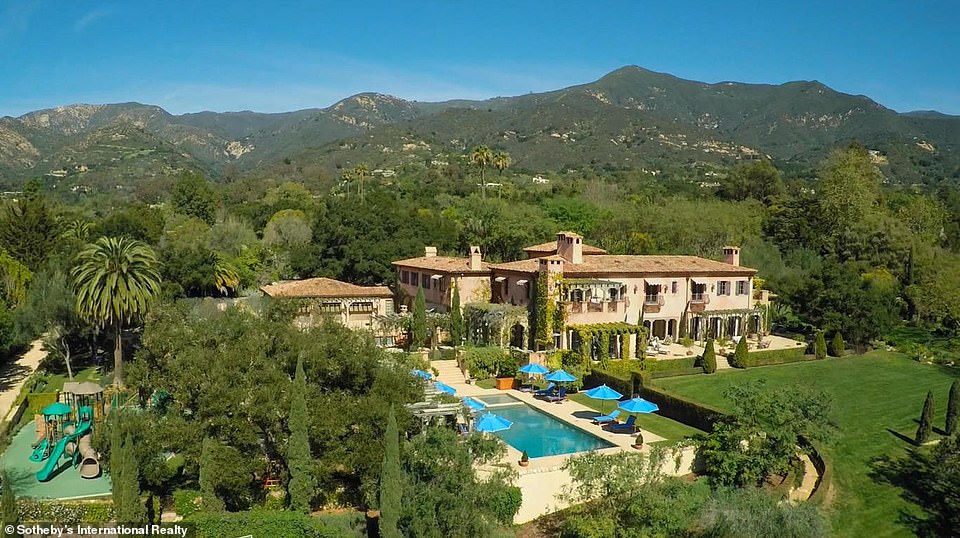 The home’s seller is thought to be Russian tycoon Sergey Grishin who bought the ‘palatial’ mansion for more than $25million in 2009 and had tried to sell the home for up to $34million before eventually accepting a loss.

Grishin is also the former owner of a different California estate – known as the Scarface mansion because it appeared in the 1983 Al Pacino movie – which sold for a similarly cut-price $12million in 2015.

Surrounded by lush green gardens and overlooking the sea, the home has been described as a ‘hidden paradise’.

One estate agent who spent an hour inside said it was ‘designed for someone who never wants to leave home’.

Brett Buschbom said: ‘I went through this house and an hour later I’m coming out like ‘wow’, the whole bottom floor felt like a resort with steam room, massage room, sauna, Jacuzzi, full bar, arcade and one of the most amazing wine cellars and that was just the basement.’

While it is unknown if the couple have plans to transform their new home, the Duke and Duchess previously worked with interior designers to achieve the perfect look.

Last year, Meghan was understood to have enlisted Vicky Charles, former Global Head of Design at Soho House and a favourite of A-list celebrities, to work her magic on Frogmore House.

Speaking previously, Ms Charles has noted her Soho House interiors brought together the ‘grit and the glamour’.

The overall feeling is one that is eclectic yet pulled-together, rooms that feel cohesive but are not overly rigid or matchy.

October events and things to do in the UK and London

Wed Sep 30 , 2020
© Provided by The Week Autumn has well and truly arrived but despite the wet weather and shorter days there’s still plenty of things to enjoy.  A lot of tourist attractions are open, new hotels are coming onto the market and there’s many adventures you have in October and beyond.  […]