Naples resident Mo Martin finished at even par at the CME Group Tour Championship in Naples on Sunday, Nov. 18, 2018.

Mo Martin will never forget the times someone told her to never give up.

Whether it was a golf star like Chi Chi Rodriguez, a donor who helped start her professional career or a family member.

Martin followed that advice all the way to the 2014 Women’s British Open title and a successful LPGA Tour career.

All of it started without many of the luxuries some associate with golf, and continued through her journey as a walk-on at UCLA, to six years on what is now the Symetra Tour, and eventually to the regular tour.

The 37-year-old part-time Naples resident’s never-give-up attitude has been tested yet again, with a back injury that has kept her off the tour for over a year. She has played one event since the ANA Inspiration in April 2019 but said Tuesday she plans to return to play in the Cambia Portland Classic from Sept. 17-20, partly because she won’t have too far to travel.

Martin’s story still relates, to the degree that she is being featured for the second time in the LPGA’s Drive On campaign. Her first-person story was posted on the LPGA Tour website on Tuesday, along with a video on its social media platforms.

“Storytelling is really an act of intimacy. So when somebody creates that openness and that trust, what the storyteller does is just listen and let the story reveal itself,” said Roberta Bowman, the LPGA Chief Brand and Communications Officer. “Mo’s journey, I’m absolutely certain, is unique in golf. And there’s so many elements that I love about this. In many ways when people hear about golfers they think of country clubs, and they think about fairly exclusive environments. And Mo’s story is a journey of love at first swing, the dedication of a family, and quite honestly the kindness of strangers.”

Naples local and LPGA tour pro Mo Martin smiles after sinking a putt on the eighth hole during the first round of the CME Group Tour Championship at Tiburon Golf Club Thursday, Nov. 16, 2017 in Naples.  (Photo: Luke Franke/Naples Daily News)

Martin, who has been staying in California full-time and recuperating since the coronavirus pandemic in March, added more layers to her already inspiring story.

In the Drive On piece, Martin is shown as a youngster with her little golf bag, and then with her tour professional bag.

“I loved seeing my little bag; it’s the first camera it’s ever seen,” she said. “I remember just carrying that around as a child so proudly and you know it didn’t have any zippers, so I had to put my golf balls right down the top and I remember times that they would spill out.

“But I was just so very proud of that bag, and then to have the split image of the staff bag and the first just mailer tube. It’s full circle and there’s just a lot of validation that comes along with it.”

That little golf bag and Martin went through a lot, with her father playing a big role. Her older brother first motivated her to play, but her dad was the one who did whatever it took. Sometimes it was a lot. And sometimes there was somebody else looking out for her.

Martin shared that going to the Junior World Championship in San Diego, her sister’s car (the most reliable, as she put it) had the transmission belt snap. Martin and her dad went to a department store, bought some pantyhose, and her dad used that in place of the belt, which was good enough to get the car to the golf course. They didn’t have money for a hotel room, so they slept on lounge chairs by the pool, and Martin got dressed in a bathroom at the course. Her dad would gather up stray golf balls, so she’d have a bucket to practice with.

Martin finished in the top three in the Junior World Championship, and that meant an all-expense-paid trip to Japan. Organizers were giving away bags of bread, and her dad asked if they could have any leftovers. It wasn’t for them. He had noticed people sleeping on the streets near the train station. They went out at midnight and left bags of bread for the people.

“He didn’t say much and just held my hand on the way back,” she wrote.

Martin played in the Southern California Junior Association and said most events cost $20. But her family wasn’t always covering that. An anonymous donor was.

Martin didn’t get a college golf scholarship. She was a walk-on at UCLA. Martin remembered running on a treadmill, and the thought crossed her mind, what if she had more resources like many others did growing up.

“I stopped the treadmill and I just started crying, and I thought, ‘Is that the way this story ends?'” she said. “I think at that moment, I turned it around and thought, ‘How about because of x, y and z then my story is written.’

“I think it was a simple change in perspective, and I think that’s when I really started to believe we start from our strengths and we take whatever cards are dealt and we make the most of them. No matter what walk of life you’re going to come from, you’re going to have your challenges. I think sometimes the more you have, the easier it is to look for more instead of being grateful for what you have, and looking for your strengths and looking for the reasons why instead of why not.”

Martin eventually did get put on scholarship at UCLA, but during her senior year, her father died of a heart attack. She moved back in with her mom and got a job at Annandale Country Club in Pasadena, California. She’d get up and practice at 5:30 a.m., open the shop at 7, and if she worked until close, she’d practice more. Some members noticed. They got together and loaned Martin $40,000 to start her professional career.

“When I saw that lump sum on a check, I was so surprised and asked how anyone could have so much money in a bank account,” Martin wrote. “One of the members who had contributed walked past me chipping in the rain one evening and said, ‘You’re going to win an Open one day.'”

They were right. Eventually.

After turning professional, she had to grind through six years on the Symetra Tour before finally getting her card in 2012. She did not have a win in 63 events entering the Women’s British Open in 2014.

Before leaving for England, Martin went with her mom to the Naples Zoo. They were sitting on a bench, Martin remembered.

“My mother, a strong but quiet person, sensed I was going through a down time,” Martin wrote. “… She grabbed my hand and looked me in the eyes and said, ‘Don’t you ever doubt yourself.'”

Martin shot a pair of 69s to lead, then stumbled to a 77 in the third round. But she battled back into contention in the final round.

And then her version of the shot heard ’round the world happened. On the par-5 18th hole at Royal Birkdale, Martin hit a 3-wood. The ball hit the green, rolled on, and struck the flagstick, stopping 6 feet away. Martin, who danced a jig in the fairway after seeing the shot, drained the putt for an eagle, then had to wait for an hour, as the other contenders faltered.

“(I remember) standing by the scoreboard afterwards and calling my mom and hearing her say ‘Do you believe me now?’” Martin said. “Those are the moments that are so powerful and burned into your memory. It’s always that happy place that you go back to and remember the sights, the sounds, the smells.

“I don’t think you’re going to find somebody who loves golf more than I do. Golf being the great equalizer, the game itself in so many ways, I’m a huge fan of it.”

Martin has been reduced to being just that, a fan, since the back injury. The pandemic, which halted the LPGA Tour’s season for months, has alleviated any desire to try to return too quickly.

“It’s difficult when you’ve got aches and pains, as an athlete you need every inch of your body and I’ve seen a lot of people try to play through injuries and I don’t think that’s ever been successful,” said Martin, who didn’t share specifics of her injury other than taking anti-inflammatory medication. “I’ve been real clear that I didn’t want to play hurt. I didn’t want to do that to my body and didn’t think that was good for my game or the purposes of why I want to play and get back.

“I’ve had my ups and downs, but it really has made me miss golf even more. I miss the outdoors, miss the fairways, miss the trees, miss my fellow playing partners. I’m still here, still going and I feel great. I’m really thankful for the people who have helped me, it’s been a journey with my back and a lot of diagnoses but again that lesson is in and out of every aspect of life — just to find the positives and keep going.”

Martin closed her Drive On story by remembering returning from a Japan trip and having a chance meeting with Rodriguez, the World Golf Hall of Famer who also called Naples a part-time home at one point. Martin had a trophy box, and Rodriguez opened the lid and wrote with a Sharpie “Never Quit.”

Keep going. Not quitting. Not giving up. Believing.

“I believe we were all born perfect for what we were meant to accomplish in this lifetime,” she said during the piece.

Martin still believes, and when hasn’t, others did.

“Everybody I’ve met I feel like has something incredibly unique, that is his or her own, no matter what, it’s a valid contribution,” she said. “Finding what that piece is and what your gifts are is such a wonderful part of this life. It’s something I truly believe. Where did that come from? Maybe that was a gift to me to understand that, and my parents also just seeing value in everyone.”

Greg Hardwig is a sports reporter for the Naples Daily News and The News-Press. Follow him on Instagram, Facebook and Twitter: @NDN_Ghardwig, email him at [email protected] Support local journalism with this special subscription offer at https://cm.naplesnews.com/specialoffer/

Capture the best of California's peaches in preserves, with a dose of revolution

Wed Aug 19 , 2020
Rosy pink peach juice and cane sugar roil together in a copper jam pot, tight bubbles tapping out a steady beat on the stove top like a good, hard summer rain. Chunks of O’Henry peaches bobble at the surface among the foam, while steamy puffs of fragrant air linger in […] 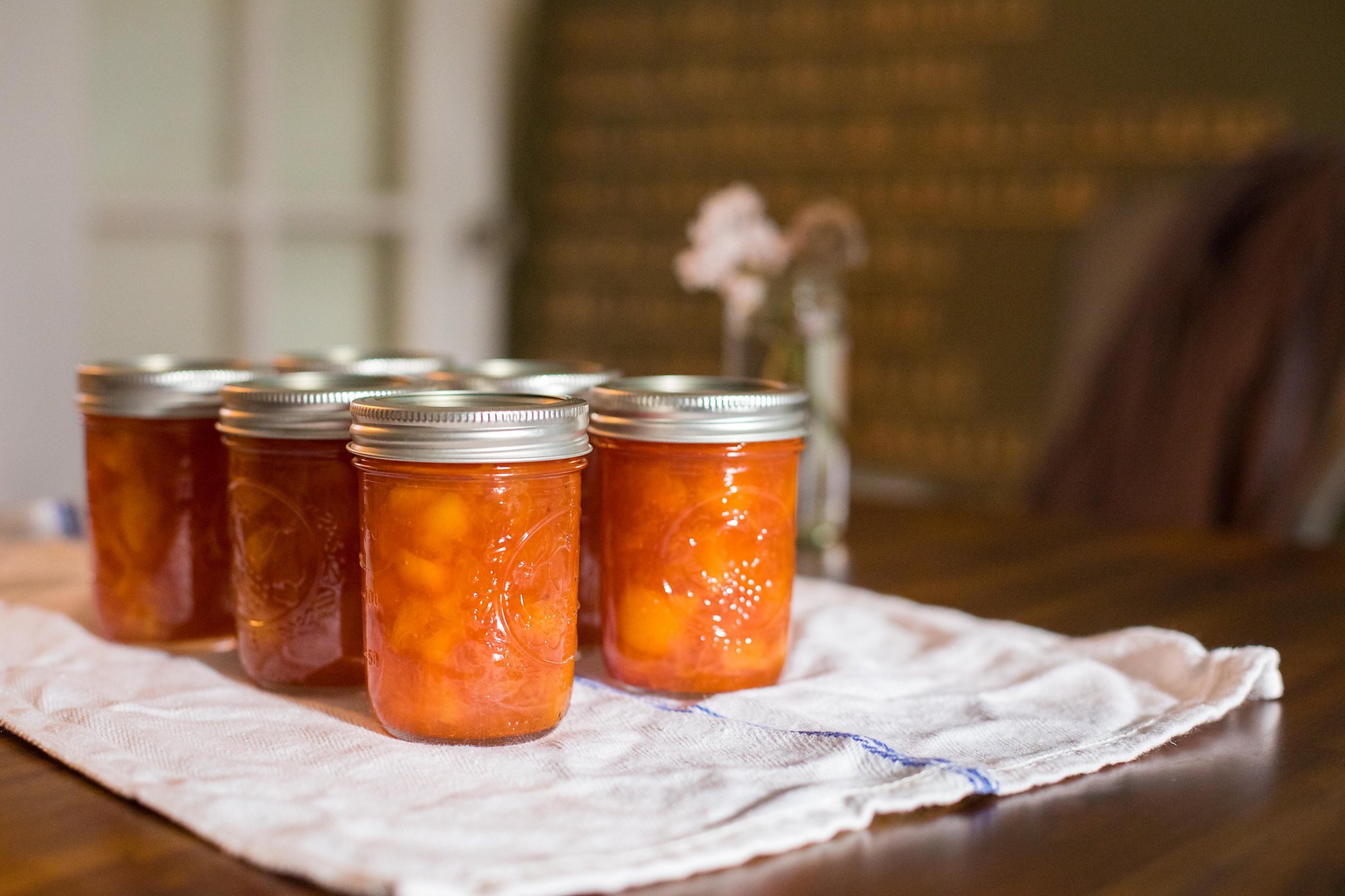