Coming to terms with the challenges and opportunities of connecting to God.

For years, I was frustrated by my own lack of connection to God. It was frustrating precisely because I was actually fairly sure of my beliefs – at least, as much as an observant Jew raised by a philosopher and a lawyer could be sure of anything. I determined at a fairly young age that belief in God made more sense to me than its alternatives, and more specifically, that the Orthodox Judaism in which I was raised made the most sense as my future path as well. I had questions, but was confident enough; I believed.

But I was frustrated by the gap between the intellectual and the spiritual. I knew, intellectually, but I didn’t know, really know, in the depths of my being. I challenged myself even in moments of alleged inspiration: Is this real? Am I really connecting to God, and feeling His presence? Do I like singing these Jewish songs because of God or because of the music? Does my awe of nature count as awe of God, if it is only my brain that draws the connection between Him and the natural world which I believe, intellectually, He created? How can I build a true, deep, emotional awareness of God in my life, and how will I even recognize it if it happens?

At some point, I brushed off these questions by labeling myself “intellectually spiritual.” I believed in the value of spirituality, but had trouble feeling it myself; my innermost inclinations went more towards ideas and what made sense than towards what I felt. I probably figured that if I could name these tendencies, I could be okay with them. I didn’t need to connect spiritually like I imagined others did, or assess whether feelings of spiritual connection were “real,” as long as I could place myself, my religious life and my religious choices, in an understandable framework.

Maybe it wasn’t that I was too intellectually oriented to connect; maybe I was simply afraid.

More recently, however, I began to wonder if all that angst – all that lack of connection – was a cover. Maybe it wasn’t that I was too intellectually oriented to connect; maybe I was simply afraid.

The realization hit when I was pregnant with my fourth child. (Why then, and not with the first three? Good question.) If one is looking for an inspirational point of spiritual connection with God, carrying another human being inside you as His partner in creation of a life has a lot of potential. I was blown away by every fetal movement, every ultrasound, every sound of my baby’s heartbeat in the doctor’s office. There were times I felt so overwhelmed by the miraculous nature of what was going on in my body that it seemed no one else could possibly understand it like I did. I found myself saying things like “no, really, it’s a miracle! I know everyone says childbirth is miraculous, but it really is!”

And “miracle” implies God’s hand, right? So in the throes of those moments of deep connection to the miraculous, did I embrace the sense of God’s presence in my life and uterus, finally at peace with my ability to “be” spiritual?

I couldn’t take it. For years, I’d longed for God to feel “real,” and finally I realized the problem was that the feelings were too real, too powerful. Overwhelmed, I would immediately shut down all thoughts of the awesomeness of my baby’s existence and go about my routine day. I longed for those moments of pure awe, and I dreaded and ran from them.

At some point during that pregnancy, I was struck by the memory of a dream that had haunted me for a long time but which I’d almost forgotten. I don’t remember anything about the dream except one moment: I heard God speak my name. Nothing else, just “Sarah.” And I was terrified. Not that He would hurt me; not what Jewish scholars call yirat ha’onesh, fear of punishment. In that dream, and anytime I thought of it, I was just plain terrified by the imagined experience of hearing the Divine; yirat haromemut, fear (awe) of His exaltedness.

Looking back at that moment in that dream, I realized my brain was trying to process what it might mean to truly connect to God, and perhaps the real reason I felt blocked from it. The prophet Jeremiah described the experience of prophecy – the ultimate connection to God – as “fire… like a hammer smashing a rock” (23:29); my dream, perhaps, was a subconscious attempt to understand that feeling. Maybe my dream was telling me the real reason I couldn’t achieve spiritual connection in my life was that on some level, I was putting up walls. Maybe I knew, subconsciously, that I couldn’t even handle a spark of such an experience in real life; I could barely take it in a dream. It was too real for real life.

The Hebrew month of Elul that leads up to the Jewish New Year can be read as an acronym for the words “Ani l’dodi v’dodi li” – “I am to my beloved, and my beloved is to me.” These beautiful words come from Song of Songs 6:3, part of a powerful love poem often understood as a metaphor for the relationship between God and His people, and they are understood as expressing the idealized connection we aim for at this time of year.

But in the previous chapter of Song of Songs we find a scene that portrays separation and missed opportunities. The woman is in bed when she hears a knock at the door; her beloved is there, but she is too tired to get up and get dressed to answer it… until she finally does, and he’s already gone.

Sometimes we are too lazy to acknowledge God’s knock, and sometimes, maybe, we are actually too scared. Maybe, deep down, the woman in Song of Songs fears the intensity of her feelings for her beloved, and has to gather not just energy but courage in order to face him.

It takes courage to acknowledge the reality of those moments when God shows up and knocks at our door. That knock may come in the form of a baby’s kick or a beautiful sunrise. It could be while using the bathroom and being suddenly struck by the complexity of our biology. It could be a Torah verse or an insight that hits us on an inexplicably deep level. It could be on a day when everything works out so neatly that we can’t help but feel we’ve caught a glimpse of order in the universe. What a blessing that He keeps knocking, offering us the opportunity not just in the month of Elul but in all those moments, big and little, throughout our lives.

Our challenge is to open the door and say, like the prophets of old did despite their terror, “Hineni: I am here” – as, I know, You are too.

Kaia Gerber’s blonde bob hair transformation is a dramatic one

Tue Aug 18 , 2020
Where Emily Ratajkowski and the Duchess of Cambridge emerged with lighter, honeyed hues post quarantine, Gerber has opted for something a little edgier, taking her signature brown bob to an icy-white blonde over the course of lockdown. Fast-forward to this week, and Gerber has unveiled a much brighter, blonder hue […] 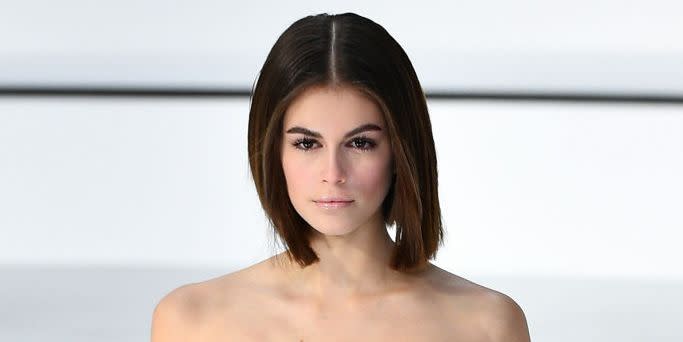