It helps a little—just a teeny-weeny bit?—to reflect there’s nothing new under the sun. As with America’s latest puritan episode: tight lips, smoldering eyes, icy rage against human hindrances to realization of the truth as apprehended by—who else?—the puritans themselves. We’ve been there a number of times before, and here we go again.

Puritans pop up everywhere in human affairs: not wearing the homespun and wide-brimmed hats we associate with the 17th century archetype; hugely interested, all the same, in getting fellow citizens to straighten up and fly right. From their moral height they look down on the rest of us, milling about in disarray and confusion.

We don’t know what we’re doing. Ah, but they do. And they’re going to tell us. You may count on it, I sorrow to report.

You may count on it because such is the puritan modus operandi—pointing, accusing, blaming, denouncing, rejecting back-talk. Puritans aren’t much on free speech, an instrument they tend to claim as their own.

Typically, they present themselves as reformers setting right, or trying to, the varied offenses of those in power; which explains in part their appearance amid the spiritual tussles of the Reformation era.  They were not bad people, necessarily—just overbearing and intolerant. Thomas Babington Macaulay, in his monumental History of England From the Accession of James II, fixes unsparing attention on the Puritan program of drilling “the minds of men into conformity” with their system of theology. They—the Puritans—were right. There was no profit in fooling around, or even arguing, with the losers who had everything so terribly wrong.

“Churches and sepulchres, fine works of art and curious remains of antiquity,” writes Macaulay, “were brutally defaced. The parliament resolved that all pictures in the royal collection which contained representations of Jesus or of the Virgin Mother should be burned. Sculpture fared as ill as painting…Sharp laws were passed against betting. It was enacted that adultery should be punished with death…Public amusements…were vigorously attacked.”  Bear-baiting, said Macaulay, in a deservedly famous passage, “strongly stirred the wrath of the austere sectaries.”   The Puritans hated the sport  “not because it gave pain to the bear, but because it gave pleasure to the spectators.”

Then there was the abolition, in 1644, of Christmas as a day for feasting and enjoyment.

Cupping our ears, we note some echoes. The burning of art depicting Jesus? The smashing of sculpture deemed offensive to current onlookers? Most of all, the snarling  contempt the puritans of the 17th century showed for beliefs not their own: here you might argue is the link between the desecration of churches hundreds of years ago and the  onslaught against the discoverer of America and the images celebrating his achievement. Macaulay mentions no learned seminars that considered  the place of stained glass in the representation of Christian reality; no seminars took place in the summer of 2021 with an eye to appraising the legacy of Christopher Columbus. Down he went, the discoverer of the New World — that is, from a European perspective — just as quickly as a rope could be tossed over his bronze shoulders. You don’t get much cockier than that in this day and age. You praise or condemn. No more is wanted. It’s wish-fulfillment in a righteous cause. Let the doubters and nay-sayers snivel. Why, you could call it sort of a 21st century lynch party!

Whoops, didn’t the word “lynch” get outlawed  by a number of the neo-puritans?  I believe it did. These invidious parallels do arise when the righteous mount their high horses and scour the countryside for unsatisfactory persons of every kind and description. The puritan is out to purify. His task is large, in that the more purification he undertakes, the more human prospects he discovers for the treatment he has in mind. You start by removing statues of the “traitor” Robert E. Lee. Soon the truth dawns. America was unsatisfactory from the word go. We made national heroes of slave-owners—George Washington, for instance, the misbegotten father of our misbegotten country. And Thomas Jefferson, who more than anyone else made “equality” our national creed. These people’s indifference to human suffering polluted all they touched: not least the country itself. And its churches! And its courts of justice!

Once you start, you can’t stop. The English Puritans linked bear-baiting with the spectacular decline of human aspirations that commenced in the Garden of Eden amid the abandonment of God’s summons to obedience. An unclad couple seduced by forbidden fruit—where was it to lead if not to the pitting of bears against each other in an arena?

Well. Maybe not, viewed in a certain light. But the point with neo-puritans rarely is logic, for all their undoubted intellectual attainments. The point, to all appearances, is power, and the joy of  re-shaping life and the people who lead life ill-knowing or outright denying their own defects. Pointing out, and especially remedying, the defects of lesser others is a human pleasure remarked for centuries.

The danger that accrues from a general campaign against the unholy and unworthy has to do with the stench the campaign gives off: the ugliness of language (“racist,” “slavemaster,” “traitor”) and the deflating effects of repeated moral takedowns. But the stench is just the start. Two factors intensify the danger.

There is first the debasement and distortion of thought—of intellectual reflection. The capacity of the neo-puritans for dogmatism seems without limit. Things are as “we” say! Objections find no home in neo-puritan discourse. Thus white people’s imputed values, as listed in an anti-racism training manual—“objective, rational, linear thinking,” “mechanical time,” etc.—undermine the imputed values of black people, and are accordingly Bad. Bad because “we” say so, exercising our “right” to affirm the subjective, the non-rational, the non-mechanical in the face of everything civilization used to teach. A North Texas University mathematics professor was fired last spring for imprudently ridiculing a claim—made at the departmental level—that statements like “America is a land of opportunity” constitute deplorable “microaggression.” Ah, yes: America’s not a land of opportunity. Remember that with mournful mien while laying out the eigenvalues and eigenvectors.

A key difference between the old and new styles of puritanism is the lack, in the new one, of religious content. The old puritans had their eyes fixed, a bit awkwardly, on heaven. They calculated that God had His eye on them. They would answer to Him for the durability of His word as received on this foul earth. To “purify”—to make clean—the polluted Church of England was their goal. Out with bishops! Out with masses! Out with altar rails and written prayers! They knew the pathway to heaven. They had only to point it out.

The neos are something else again—wedded to God knows what, beyond the levelling of human distinctions erected by oppressors whose treason we have at last found out. Equality of something or the other—not opportunity, we learn in these latter times—is the magnum bonum they look toward: so magnum that old-fashioned ideals representing civility and tolerance, not to mention right understanding, must be brushed out of the way. Onward!  Onward!  On their word. On their inspiration.

So readily have the neos assented to the puritan mission, practicing their scowls and fist clenches in the bathroom mirror, it seems to follow there is a human attribute called puritan, extant in every age that gives offense of one sort or another: meaning every age.  The blokes can’t help themselves, is my point.  The point requires follow-up. The puritan begins with total self-confidence. He knows all. And he’ll tell you all—the whole shmear—if you give him half a chance. Behold the advantage today’s puritans enjoy over their less cocksure victims. The media love a puritan who’ll give the media’s adversaries a hiding and a flaying.

Does the name Trump come to mind? The media—my profession for half a century and more—abominate the same personage, the same spirit, the same outlook on life that the neo-puritans abominate.  The denunciatory alliance they shape is immensely influential. If the neos say Americans are oppressed, and Trump betrays indifference to that claim, the media advertise the claim all the more eloquently.

The alliance is formidable at first glance but frail in the face of common sense. The job of the commonsensible—who are a numerical majority—is to group together, listen carefully to what the puritans are saying, and reply… not “Shut up,” that being the puritan style. No, the duty of the commonsensible is to reply, with a certain demeaning weariness:   “Oh, come on. Get real.  No reasonable person thinks that way: nobody you’d treat to a beer at the baseball park or allow to marry your daughter.”

“O, you are sick of self-love, Malvolio, and taste with a distempered appetite,” says Olivia to her smarmy puritan steward in Twelfth Night. No justlyaimed rebuke has of itself the power to restore discharged mathematicians to their jobs or calm the rages of New York Times editorial writers, but the truth is after all the Truth: destined, our tradition tells us, to prevail.

William Murchison is a nationally syndicated columnist and author, most recently, of The Cost of Liberty: The Life of John Dickinson.

Tue Aug 4 , 2020
Author Yousfa Janjua shares the inspiration behind her newest children’s book about a much needed … [+] and neglected topic: A potty-training book for Muslim kids. Photo credit: Yousfa Janjua In the midst of a pandemic, hygiene is on top of Yousfa Janjua’s mind. She witnessed the toilet paper shortage […] 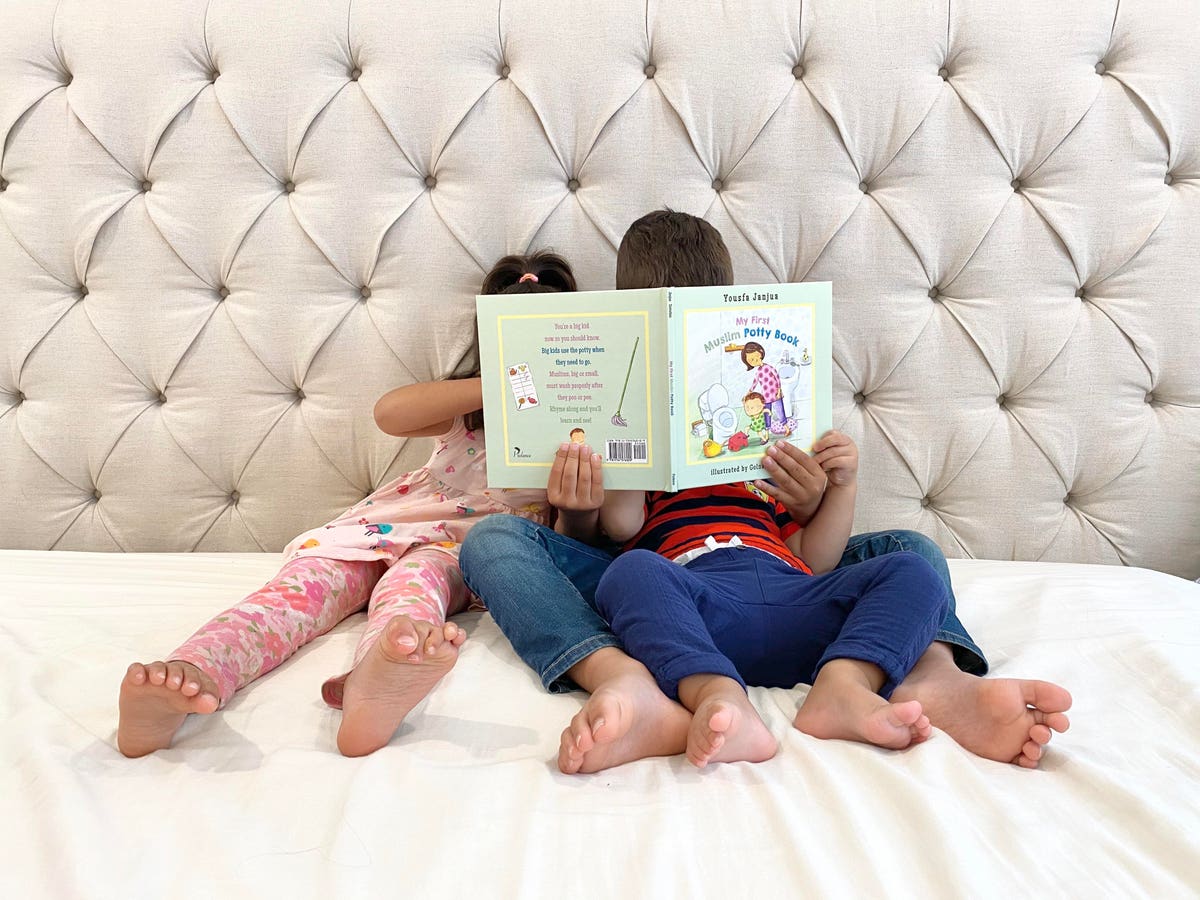