Kerry Katona is well known for her turbulent love life, as she’s struggled to find happiness over the years.

The 39-year-old has been married three times and has had five children, having sadly gone through heartbreak and struggling with her own mental health and addiction.

But now Kerry seems to be happier than ever with her personal trainer boyfriend Ryan Mahoney.

The former Atomic Kitten star has overcome her problems and now has a positive outlook on life, often sharing inspirational messages with her followers on Instagram.

We decided to take a look back over her former relationships and her road to ‘Happily ever after’.

Brian and Kerry got together when Westlife and Atomic Kitten toured together.

Three months after meeting, Brian proposed to her and they welcomed daughter Molly in August 2001.

They had a huge celebrity wedding in 2002, surrounded by their family in friends.

A year later their daughter Lily-Sue, was born.

But they separated in 2004, shocking the world and their fans.

They had a messy divorce, but are now back on good terms.

Kerry got engaged to her former childhood sweetheart Dave Cunningham in 2005.

But they split quickly after having a huge argument in Spain, when Kerry reportedly discovered decorator Dave had been seeing his ex-girlfriend behind her back.

Receive newsletters with the latest news, sport and what’s on updates from the Liverpool ECHO by signing up here.

A source told the People at the time: “Kerry is devastated. After everything she has gone through this year she truly believed Dave could be her saviour.

“Then the shocking revelations about his ex emerged. But because her private life has been made public before, she made a pact not to discuss the split.”

But their marriage wasn’t a happy one, as during their time together, Kerry, who was once worth an estimated £6.8 million, was declared bankrupt.

During her time with Mark, Kerry made her infamous This Morning appearance during which her slurred speech and behaviour caused concern with host Phillip Schofield and with viewers.

Kerry admitted she was addicted to cocaine and that she’d go on ‘three-day coke binges’ with Mark.

She said: “I hated my life. I’d lie in bed for three days in a row doing cocaine with Mark. We did coke in our en suite and had a lock on the door. The kids knew if the bathroom door was locked they mustn’t come in.”

Kerry became so low she revealed she’d even thought about ending her life during their relationship.

Kerry and Mark split in 2010, two years after she was declared bankrupt, and he later publicly admitted he ‘bled her dry’.

In 2012 Kerry met ex-rugby player George Kay when he worked as her driver.

George proposed to Kerry at the top of the Blackpool Tower in April 2013.

She gave birth to their daughter together, Dylan-Jorge in April 2014 and they got married in September 2014.

Just two months after they got married their relationship was on the rocks and when George was hospitalised with ‘signs of a stroke’ in June Kerry struggled to cope.

They briefly split after George’s behaviour became too difficult for Kerry to deal with, but they got back together and renewed their wedding vows.

The pair’s turbulent relationship continued and in June 2017 the pair split for the final time.

The Atomic Kitten star shared a loved up selfie of her and the Scottish comedian to Instagram.

But a few months after plastering James over her social media, their romance was over, with Kerry announcing they’d split, by sharing a post about single life.

In July 2018 Kerry shared a snap of personal trainer Ryan Mahoney to social media, telling her followers she was “officially spoken for.”

Kerry and Ryan met on dating app Bumble and seemed very happy together.

They split in October 2018 following a make-or-break holiday in Thailand.

Kerry confirmed the couple’s reunion in her New! column in 2019 and said Ryan had been a ‘godsend’ after the death of her ex-husband George Kay.

She said: “He’s been a good friend to me and over the last few months we just decided to give it a go.

“He’s been a godsend recently when I’ve needed him most. We’re settled, committed, my kids love him and so do I.”

Since then they’ve gone from strength to strength, with Kerry sharing a gushing post on their second anniversary in June.

The former Atomic Kitten singer wrote: “2 years ago today I went on a date with @ryanmahoney_7 and my life changed for the better!!!

“I mean come on people it’s been two years and I’m not pregnant, engaged, married or divorced [we’re] definitely doing something right this time! He’s definitely a keeper!

“Love you so much babe thank you for always encouraging me to be the best I can be! [You’re] amazing”.

Sun Aug 9 , 2020
Meet the ‘inside-out’ little girl who was born with her stomach, liver and bowel on the oustide of her body. Laurel Phizacklea, two, from Cambridge, wasn’t expected to survive birth and her parents, Kelly, 30, and Sean, 34, were offered a termination at their 12-week scan when doctors diagnosed their […] 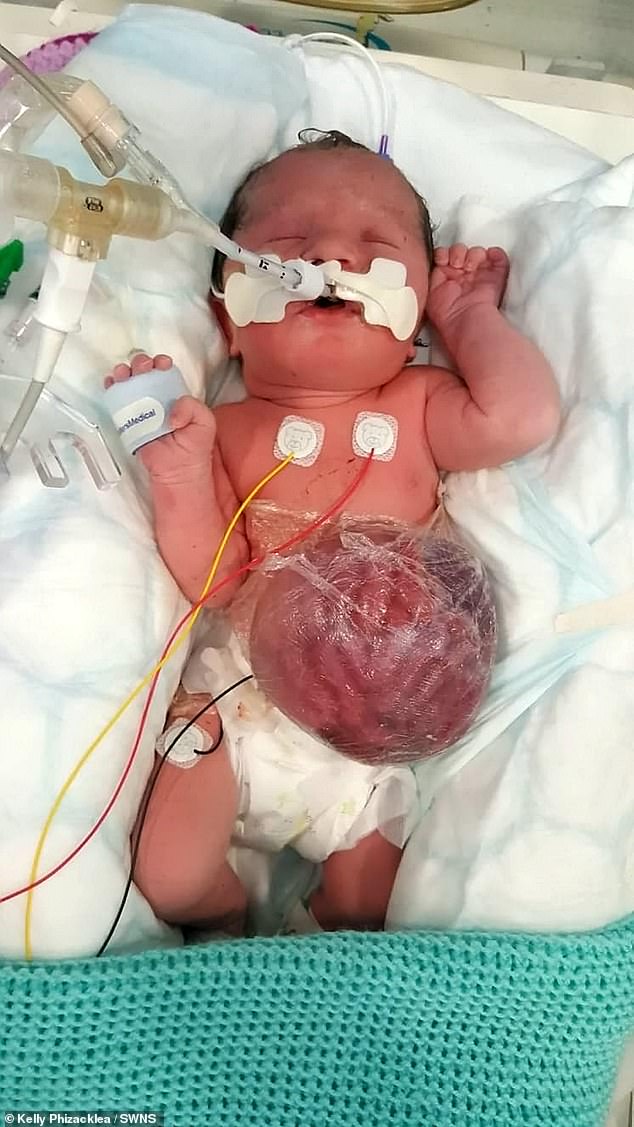