In the summer of Covid-19, sidewalks are expanding — making room for new outdoor restaurant seating or extending the square footage of existing dining areas much further, all the way into the street. In what used to be parking spaces, there are now tables and chairs, surrounded by cheery temporary fences and bunting, all to provide the social distancing that our new rules for public life require. The street itself is being temporarily remade. When my home city of Boston recently announced a new program for restaurants to request temporary ramps, guaranteeing wheelchair passage from the sidewalk to the newly commandeered parking spaces, I was thrilled — but not because of the novelty. The quest for accessible passage through the built environment is an old story, and its history is newly alive in the shifting shapes of our streetscapes in 2020. That forgotten history contains clues for reinventing street life that might be our best resources in a pandemic, and as the U.S. confronts a renewed national racial justice movement.

The need for accessible streets and sidewalks has utterly reshaped the contemporary cityscape, and the most profound change is also the most modest: the curb cuts that you’ll find now at many street corners in cities all over the world. The revolution in street corners seems like an obvious civic good now, a common‐sense softening at the edges of the built environment, a simple solution to buffer the concrete shape of a world built with homogenous users in mind. But it would not have happened without disability activists’ long, hard fight.

Curb cuts are nothing but edited concrete shapes, an inclined plane newly cut and laid where there had once been a step down. The angle of the “cut” is calibrated for ease of use by people in wheelchairs. It needs to be shallow enough for safe passage when someone is traveling alone, whether using their hands to push their wheels or a motorized chair commanded by button or switch.

If you’ve ever dragged your wheeled luggage over a dozen blocks of busy sidewalk, walked your bike through a crowded area or gingerly pushed a sleeping baby in a stroller — be careful to avoid any sudden bumps and jolts! — then you stand in this inheritance, too. This commonplace rite (and right) of passage was rolled out at improbable scale, taking old cities and chopping their corners, one by one, bending their angles for the work of wheels.

Curb cuts are retrofitted alterations to the textures of the built environment, and they make plain a global history of city design that has largely been planned around a normative “user” of its streets. Design makes possible or impossible the means of practical use, but it is also a pointed commentary on the meaning of bodies that move through spaces. A city with only hard-angle ups-and-downs, curbs, and steps to all its doors and entrances is a city that assumes a strong ambulatory body, unencumbered by injury of any kind, unaccompanied by an older adult companion or a young child in arms or holding a hand while learning to walk. Streets, that is, have long been designed for working men with physically strong bodies and no meaningful caretaking responsibilities — no obligations to parents or ailing siblings or offspring — not the kinds of caretaking that create a clunky, inefficient, assistance-borne passage through city streets to get to the places a body needs to go.

When injustice is tied up with the physical spaces of cities and the policies that create them, it becomes ‘difficult to assign responsibility for it — and hence difficult to change.’

Long before the Americans with Disabilities Act of 1990 mandated curb cuts at all street corners, 30 years ago this summer, disabled people had pointed to the design of the street as a key locus of their political rights — the sidewalk that stands for being in public space, and therefore in the public sphere. Disabled people had called for curb cuts since the 1940s as a form of rehabilitation for veterans, requests that went largely unheeded except for rare exploratory programs. In the present day, curb cuts are so common, both ordinary and even mundane, that most people know nothing of this history. But the resistance to their widespread implementation was protracted and fierce. Outside a few small communities like Berkeley, where vocal activists won some local implementation, there was little understanding of the chicken-or-egg problem of accessible design. “When we first talked to legislators about the issue, they told us: ‘Curb cuts, why do you need curb cuts? We never see people with disabilities out on the street. Who is going to use them?’” recalled Ed Roberts, a disabled civil rights leader in the Bay Area in the 1960s. “They didn’t understand that their reasoning was circular.”

Activists in that era were rumored to have mixed and poured concrete to smooth the passage from sidewalk to street in a DIY “editing” of the city, a hacker-style approach to creating the conditions of the future. Others took a more forceful tactic, smashing the concrete curb away to create the cut required in guerrilla-style street action, even if the resulting plane would be rough-edged. You can see the remnants of this form of design protest in the Smithsonian today — a preserved bit of sidewalk taken out in 1978 by disability activists in Denver who were smashing away curbs as an unignorable public gesture, one that was both pragmatic and pointedly expressive. It’s a hunk of concrete that stands for so much: the insistence that access would not just await new architecture but must be created by unmaking and remaking the inherited street itself.

The fight culminated in a dramatic day of protest in March 1990. At the “Capitol Crawl,” people using wheelchairs, leg braces, and canes made their way to the hundred steps in front of the U.S. Capitol building in Washington, D.C. Then they began to climb those stairs, leaving behind whatever gear couldn’t come with them, using their arms or whatever body parts they had available for mobility. Children as young as ten participated in what became a very public, strategic spectacle. That protest is considered by historians to have been the tipping point; the Americans with Disabilities Act was passed in 1990, requiring curb cut changes at every city sidewalk corner and ramped entrances at all newly constructed buildings, among other new provisions.

When sidewalks and streets are built for some bodies and not for others at the scale of infrastructure, they create what political scientists Clarissa Rile Hayward and Todd Swanstrom call “thick injustice” — inequities within urban structures that are “deep and densely concentrated, as well as opaque and relatively intractable.” These segregated structures of the hardscape appear to be permanent, anonymous and inevitable; it’s hard to imagine their conditions otherwise. When urban planning sends investment toward rich neighborhoods for redevelopment amenities like public parks and advantageous zoning laws, inequities result. These injustices are meted out over long periods of time, with public and private sector decisions mixed together and therefore hard to disentangle. Hayward and Swanstrom argue that when injustice is tied up with the physical spaces of cities and the policies that create them, it becomes “difficult to assign responsibility for it — and hence difficult to change.” That’s why the curb cut’s history — a successful “editing” of the built environment that arrived via mandate of federal law — is so impressive and historically profound. The careful reshaping of the sidewalk allowed more kinds of bodies on the street but also into public life. “When disabled people enact politics,” writes disability historian Aimi Hamraie, “they also design and build new worlds.”

Still, the very solidity of the built world gives it stubborn staying power. The guarantee of infrastructure — its reassuring layout as a networked system — can turn into thick injustice when planned for abstractly determined human populations, without consideration for a variety of actual bodies. Rectifying forms of thick injustice doesn’t come easily; assigning accountability and making legislative change is the work of decades. When I’m up and down on the curbs in my own city now, tackling the stairs or taking the elevator — when I watch the “kneeling” bus lower its height for wheelchairs or strollers, and when I observe who sits and who stands on public transportation — I think of those protesters on the steps of the Capitol building, insisting on a wholesale reshaping of cities and demanding a legally binding promise to make it so, one edit at a time.

The work continues — and for a design researcher like me, it’s a challenge to consider both the long sweep of history and the opportunity for shorter-term experiments. Reshaping the built environment is never simple, and when it’s rushed, as in “quick build” efforts that are devoid of equitable participatory feedback, those efforts may backfire and reinforce the thick injustices — along racial, class-based, or ability lines — that they promise to mitigate. In my own city, “Shared Street” initiatives that reallocate street space to make more room for pedestrians, bikers, bus riders and businesses are being prototyped slowly and carefully. At present, it’s a pilot program on three streets total. It started first with advance notices, and then with temporary sandwich boards announcing the new rules in the middle of the street, acting both as low-tech information booth and traffic-calming barrier. The program is growing, with community-wide webinars for feedback, orange cones with “10 mph” signs in the crosswalks, and just in the last days, more permanent speed limit signage.

I’ll be watching for these and other modest edits in my neighborhood streets. This week a restaurant outlined its own patio, made from a couple of reclaimed parking spaces, with a makeshift “fence” built of wooden pallets. It’s partly fashion, I know, but it’s also a pointed commentary on the moment. Pallets are for shipping, supporting, hauling — they’re for the conditions of construction. Just weeks ago this same stretch of asphalt held the swell of uprising crowds showing up for Black lives. The street is being remade, and maybe, in ways big or small, we might be too.

This is an adapted from the forthcoming book, WHAT CAN A BODY DO? How We Meet the Built World, by Sara Hendren, to be published on August 18, 2020 by Riverhead, an imprint of Penguin Publishing Group, a division of Penguin Random House, LLC. Copyright (c) 2020 by Sara Hendren.

Before it’s here, it’s on the Bloomberg Terminal. 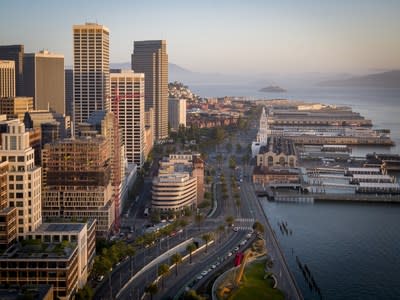