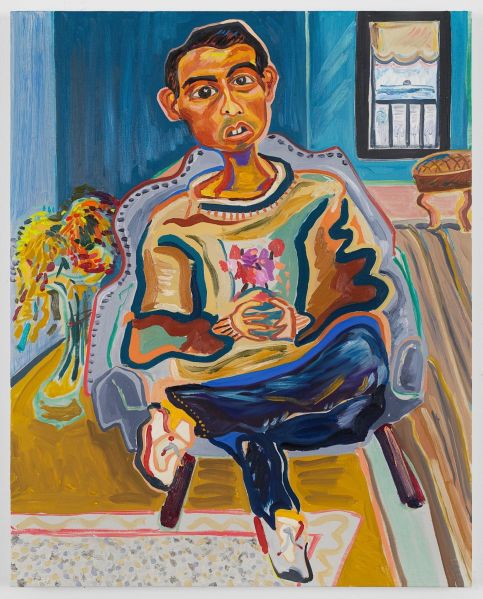 In an art world that mirrors the country’s overall inequality in terms of distribution of wealth, it’s undeniable that artists have been drastically tested by the crises of 2020. Starting out during a state of emergency has put recent MFA graduates under tremendous pressure. Rapid closures of campus-based studios and cancellations of thesis exhibitions have eliminated opportunities to showcase years of work, just as large sums of tuition loans piled up. In an effort to provide the crucial exposure provided by thesis shows, galleries Perrotin, Steve Turner and Hauser & Wirth have recently offered their digital platforms to host otherwise canceled exhibitions for students from Yale, Columbia, Cal State and the Bath Schools of Art and Design.

“It’s likely that residencies and grants are going to be much more competitive, so people will really have to create dynamic applications,” predicts Adeze Wilford, a curator at The Shed who joined Perrotin’s recent roundtable discussion with Yale students about how art can function today. “These parameters are very similar to 2008, which will have an impact on the industry. Artists’ practices are definitely going to shift because of this,” Wilford told Observer.

MFA graduates find themselves entering into a market rapidly trying to mitigate an economic downturn, but also one embarking on a restructuring and looking inward to correct past mistakes. “There have been generations of Black artists working in the same conceptual framework as white artists, sometimes in the same studio buildings, who weren’t given the same institutional recognition or market support,” Wilfred says, calling the increasing attention on institutions’ inclusivity programs “a turning point for priorities.”

Susan Chen, who recently graduated from Columbia’s MFA department, just opened a solo debut at Meredith Rosen Gallery  showing work that’s long urged for the conversations about diversity that are finally coming to the fore in 2020.

“How many Asian female painters can you name off top of your head?” she asks, hopeful about the institutional and market interest in artists of color, yet aware that it might not last. She learned about her own limitations during her first studio visit with artist Tomas Vu, who asked her why she idolizes white male painters. Looking at her bookshelf, she told him it was what they had available at the library. “It was a wake-up call,” Chen today remembers. Her personal motivation is to challenge Asian parents who question creative career paths for their children. The issue is personal for the artist, who had a family member cut ties with her for a year after her decision to pursue a career in painting.

But it’s from within her Asian American community that the 28-year-old painter finds inspiration. Initially, making landscapes was a mode of escapism, but seeing 2018’s blockbuster movie Crazy Rich Asians changed Chen’s mind. “If I could feel this way from a moment of representation, a whole community could feel uplifted from seeing themselves in the media and beyond,” Chen says.

She credits social media with making her upcoming solo show possible. The first time she placed a call for sitters on an Asian American community group, the response was “a flood” of hundreds of emails, some of which included personal stories about why her paintings were needed. The artist felt the pressure but also grasped that those feelings existed far beyond herself. She contemplates on how different her MFA experience would be if it didn’t coincide with the Trump administration, a time when she witnessed identity politics become a central theme in her peers’ work. Chen trusts the movement’s progressiveness, but is also cautious about its potential limitations on who can paint what.

As she approached the end of her degree, COVID-19 mandated its challenges for Chen. Unable to paint sitters in real life, she turned to painting herself, converting her sister’s attic and her boyfriend’s childhood bedroom into studios. “A great bonus from all of this, I suppose, is that I know I can work in any 9-by-12 feet space if needed,” she says. 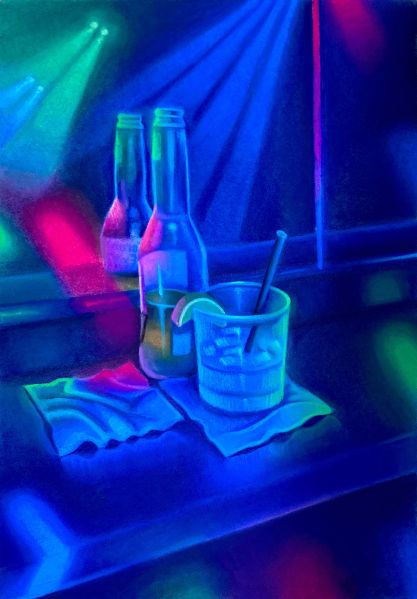 A lack of access to his subject matter also affected painter James Bartolacci, who started his painting series about queer nightlife in 2017. Focusing on spaces that promote inclusivity, such as Brooklyn’s now bygone community center and club, Spectrum, his approach to the subject has gradually expanded from partygoers to bizarrely poetic detritus they leave behind once the music stops—what the artist calls “the aftermath of a body’s presence.”

Nightlife has had multiple transitions throughout the queer liberation movement, from police-raided speakeasies to sanctuaries during the AIDS pandemic. Dating and hook-up apps have long cast shade on their relevancy and imposed financial hardship, but the pandemic’s burden has been unparalleled.

Making work about an experience that has been absent from Bartolacci’s everyday life means shifting to look at its social impact and vulnerable economy. “The entire closure of nightlife is devastating for its defendants for their livelihood,” he says. With two exhibitions coming up (London’s Taymour Grahne gallery opens a solo online exhibition of his drawings in October, before giving him a brick and mortar solo debut in February), he says any success he finds will be shared. “Hopefully these shows will allow me to give back to those who helped me create work.”

Besides its social and economic impact, the pandemic meant a sudden loss of access to materials for another Yale graduate, Kathia St. Hilaire, who creates mixed-media paintings with everyday materials such as iridescent paper or sugar packing. Going back home to Florida at the beginning of the pandemic, however, helped St. Hilaire reconnect with these materials she utilizes in her work. “I’ve been able to recenter my work to my home,” she explains while preparing for group exhibitions at Derek Eller Gallery, Tang Teaching Museum, Half Gallery, and Blum & Poe for this fall from two separate studios in Florida. “I couldn’t sacrifice from my process, so I needed a separate space with strong ventilation,” she says about reserving her Palm Beach studio for printing with toxic materials. At her Miami studio, she focuses on painting, which has become more focused on mark making and how this relates to Black abstraction since leaving her MFA program. 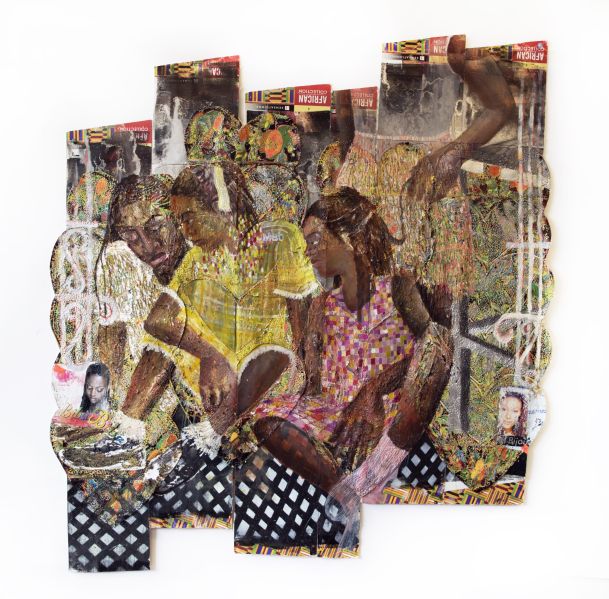 And in terms of her research process, “Being able to use institutional online databases with an extensive collection of African and Latinx history is important,” St. Hilaire says.. “I have found it useful to virtually connect to other institutions with material libraries and printmakers.”

Her densely-layered paintings pull cues from her training in printmaking at RISD as well as her interest in everyday materials related to her Haitian identity. Dreamy but also exoticized  Caribbean seascapes or family gatherings blend into tapestry and disposable box braid packs or sugar packaging. “Investing in materials with potential to look like multiple forms, such as cutout prints or textiles interests me,” says the 25-year-old who grew up around South Florida’s Caribbean communities. “The process allows me to tell my own narrative about consumption of beauty products and natural resources, but also relates to the Haitian diaspora,” she says. “Figuration helps me affirm and memorialize controversial, historic, and political issues that deal with both marginalized and privileged communities of the neo-diaspora.”

Times of social uprising have long been periods of “push and pull between figuration and abstraction,” according to Wilford, “to create works with political point of view.” Representation, with its various meanings, is a notion many fresh MFA graduates grapple with today. In doing so, they turn to their communities not only for inspiration but also solidarity, in search of what textbooks have overlooked. During times of the “unprecedented,” their debuts seems more timely than ever. 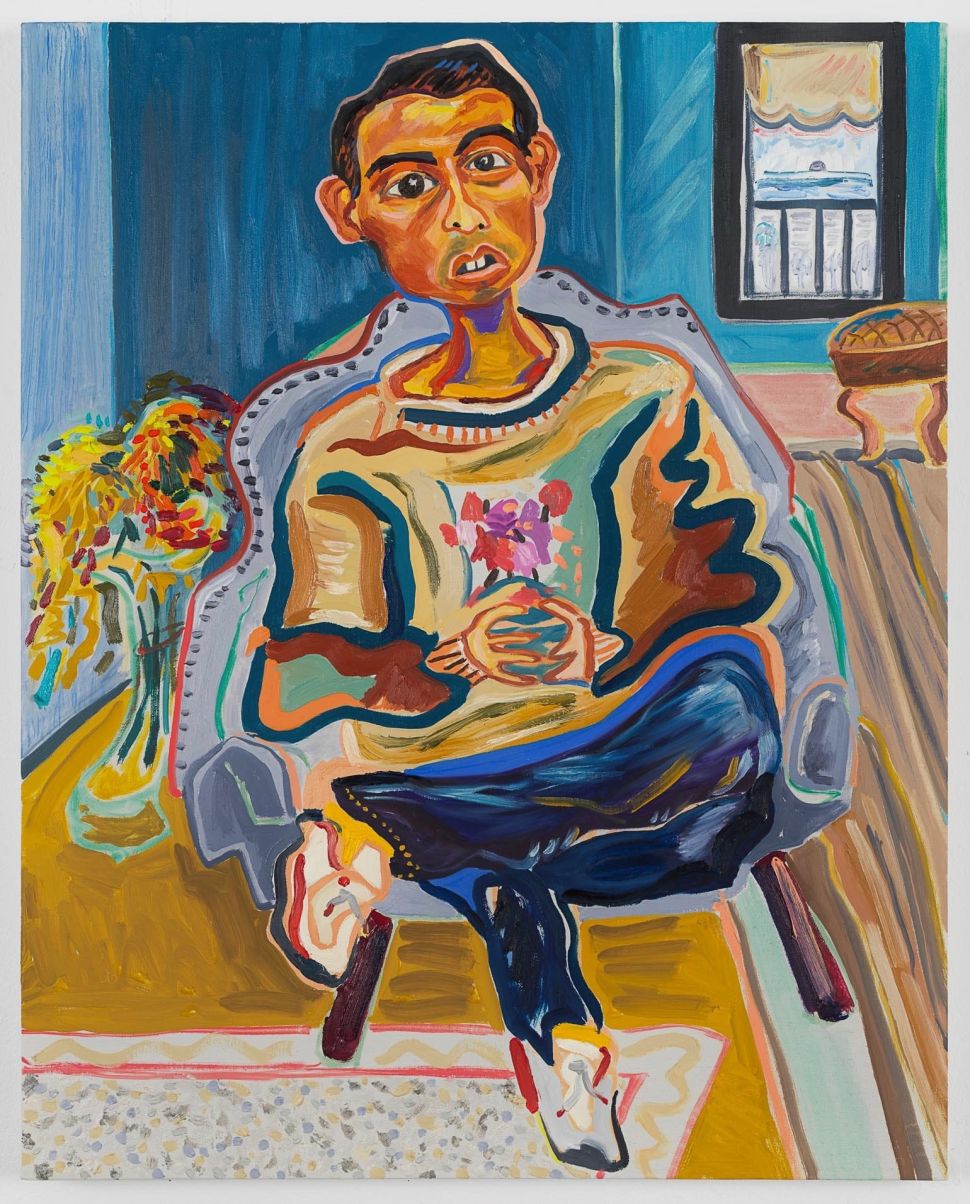 Wed Aug 26 , 2020
Bath Position 6thSlap in the middle of the table, the play-offs are five points one way and Leicester (or relegation any other year) 10 points the other. The arrival of Ben Spencer is the most notable boost since the suspension of play, the retirement of Francois Louw the most significant […]