Lewis, the son of Alabama sharecroppers whose fight for racial equality spanned seven decades, had waged a long battle with advanced pancreatic cancer, a diagnosis he shared in December, 2019.

“All of us were humbled to call Congressman Lewis a colleague, and are heartbroken by his passing,’ House Speaker Nancy Pelosi said in a statement confirming the death.

“May his memory be an inspiration that moves us all to, in the face of injustice, make ‘good trouble, necessary trouble,’” she said, using a favorite quote of the lawmaker.

First elected in 1986 and lauded as the “conscience of Congress,” Lewis, a staunch Democrat, commanded respect from both sides of the aisle.

But he forged his reputation in the 1960s, most notably during the 1965 civil rights march in Selma, during which he suffered a skull fracture at the end of a police billy club.

“There is still work yet to be done,” he urged during a 50th anniversary event at the bridge in 2015.

“Get out there and push and pull until we redeem the soul of America.”

As one of the original Freedom Riders, in 1961 he joined with black and white protesters in challenging segregation at a Mississippi bus station, spending 37 days in a sweltering, Jackson jail after using a “whites only” bathroom.

Two years later, Lewis was a keynote speaker at the March on Washington in 1963, which he helped organize as a 23-year-old.

“We march today for jobs and freedom, but we have nothing to be proud of,” Lewis said back then, during the march from the steps of the Lincoln Memorial.

“For hundreds and thousands of our brothers are not here. For they are receiving starvation wages, or no wages at all.”

“And then you holler, “Be patient.” How long can we be patient? We want our freedom and we want it now.” 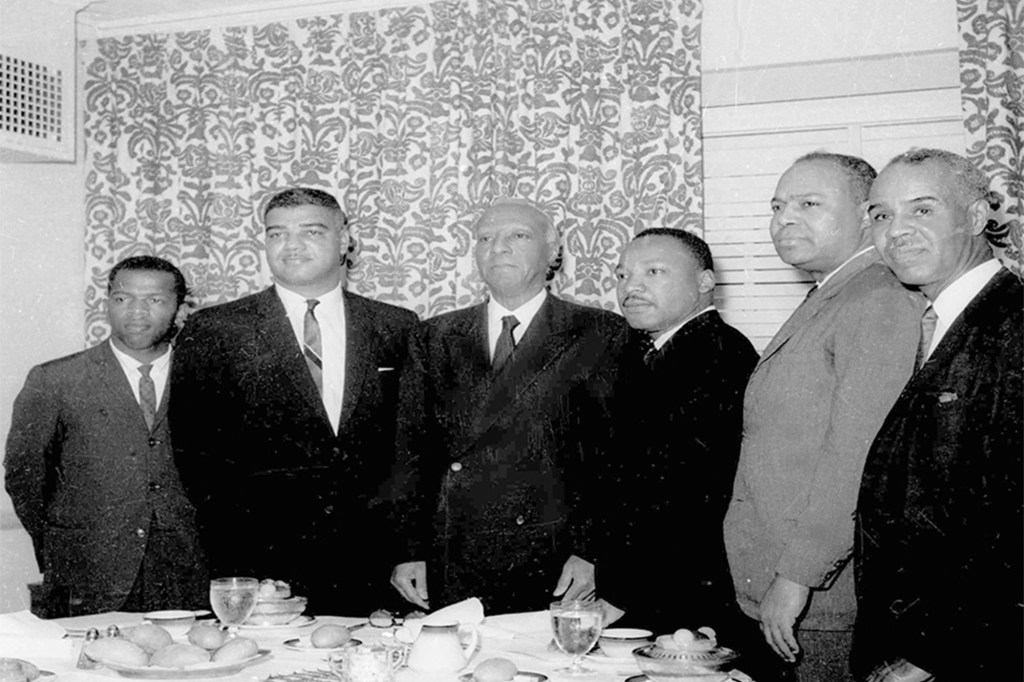 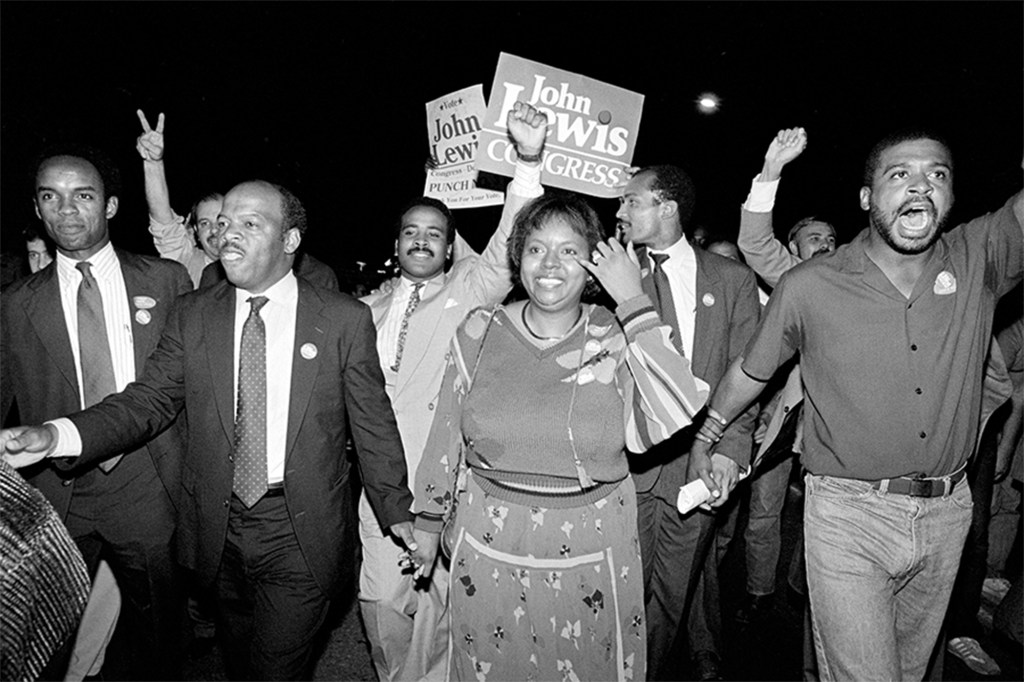 John Lewis, front left, and his wife, Lillian, holding hands, lead a march of supporters from his campaign headquarters to an Atlanta hotel for a victory party after he defeated Julian Bond in a runoff election for Georgia’s 5th Congressional District seat in Atlanta 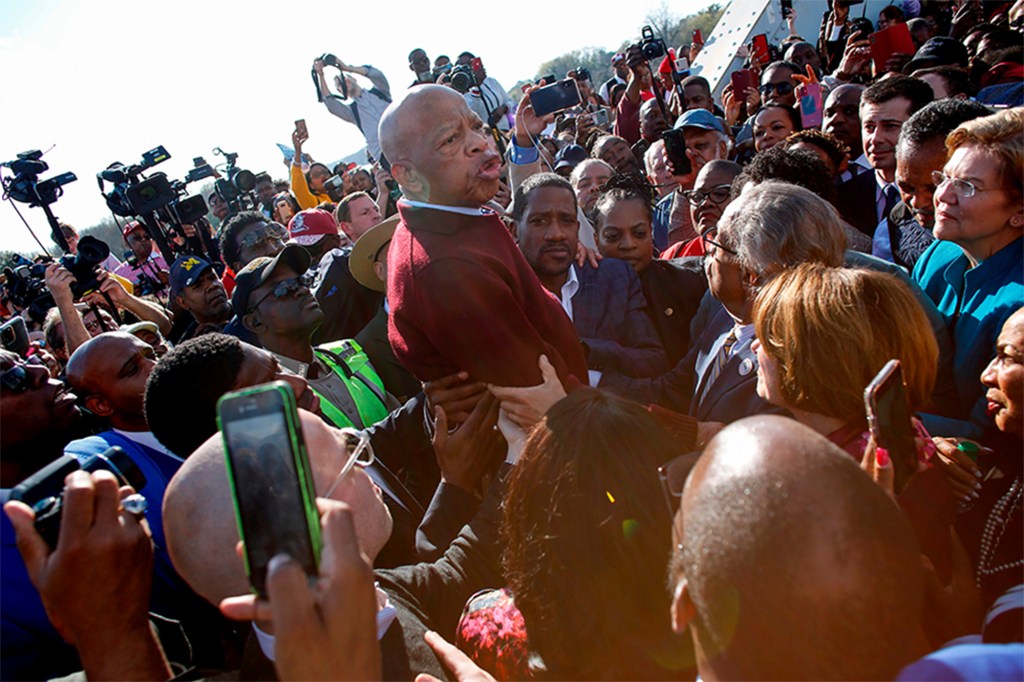 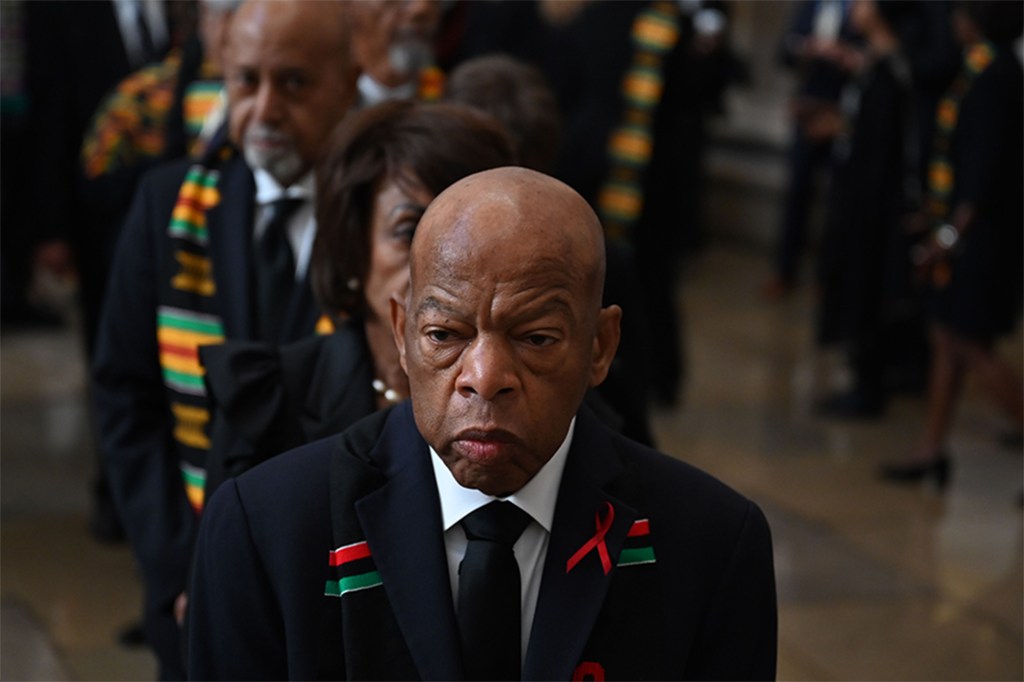 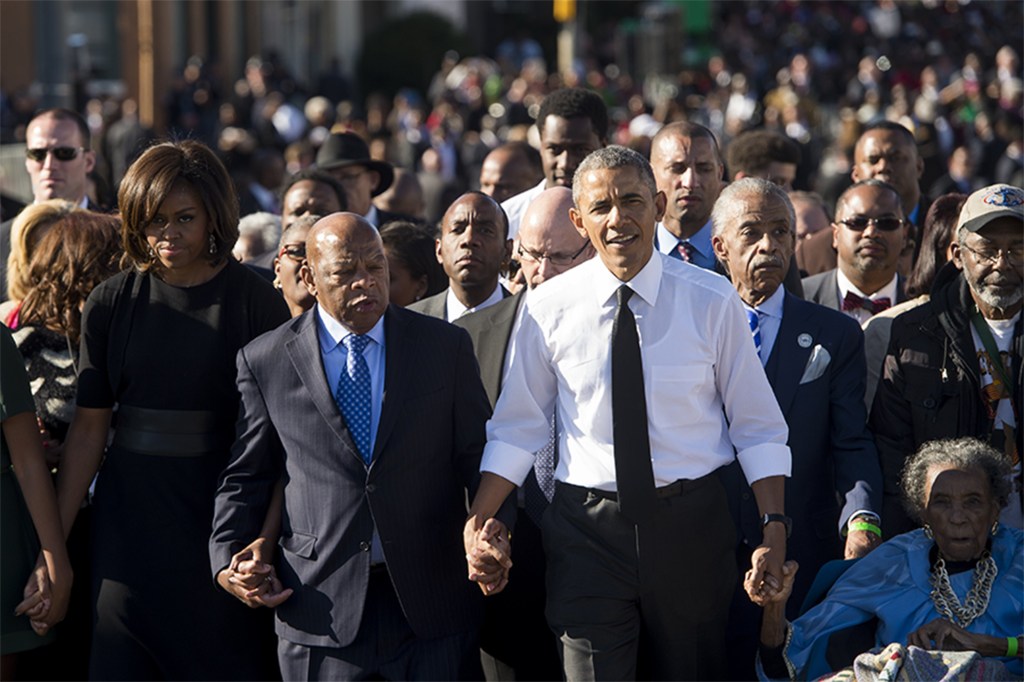 US President Barack Obama walks alongside Amelia Boynton Robinson (R), one of the original marchers, the Reverend Al Sharpton (2nd R), First Lady Michelle Obama (L), and US Representative John Lewis (2nd-L), and also one of the original marchers, across the Edmund Pettus Bridge to mark the 50th Anniversary of the Selma to Montgomery civil rights marches in Selma, Alabama. 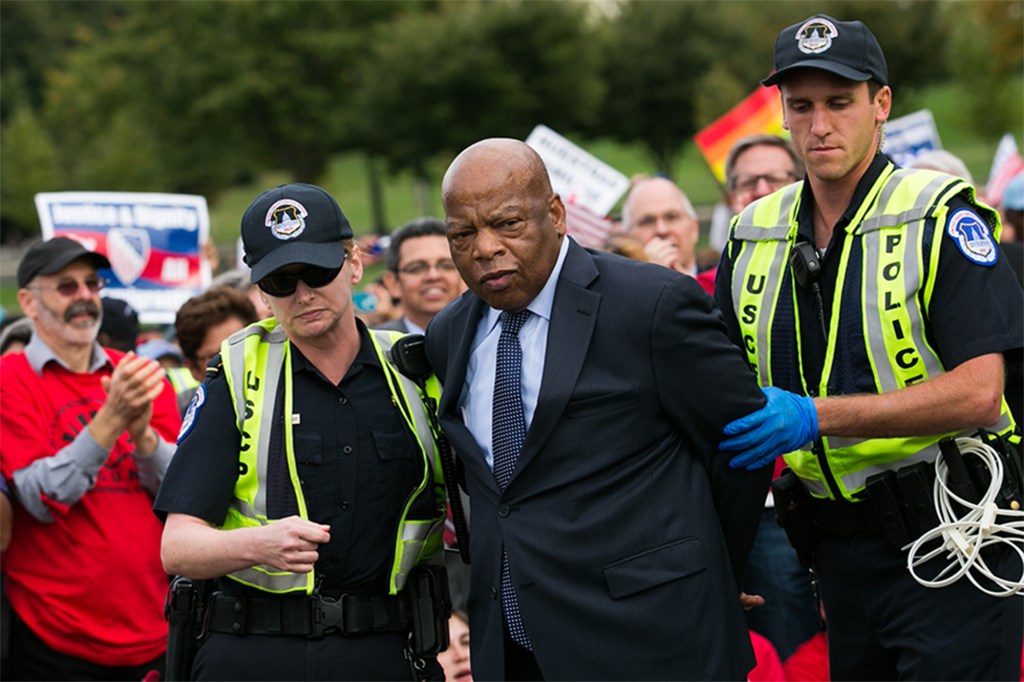 Rep. John Lewis is arrested by U.S. Capitol Police after blocking First Street NW in front of the U.S. Capitol with fellow supporters of immigration reform 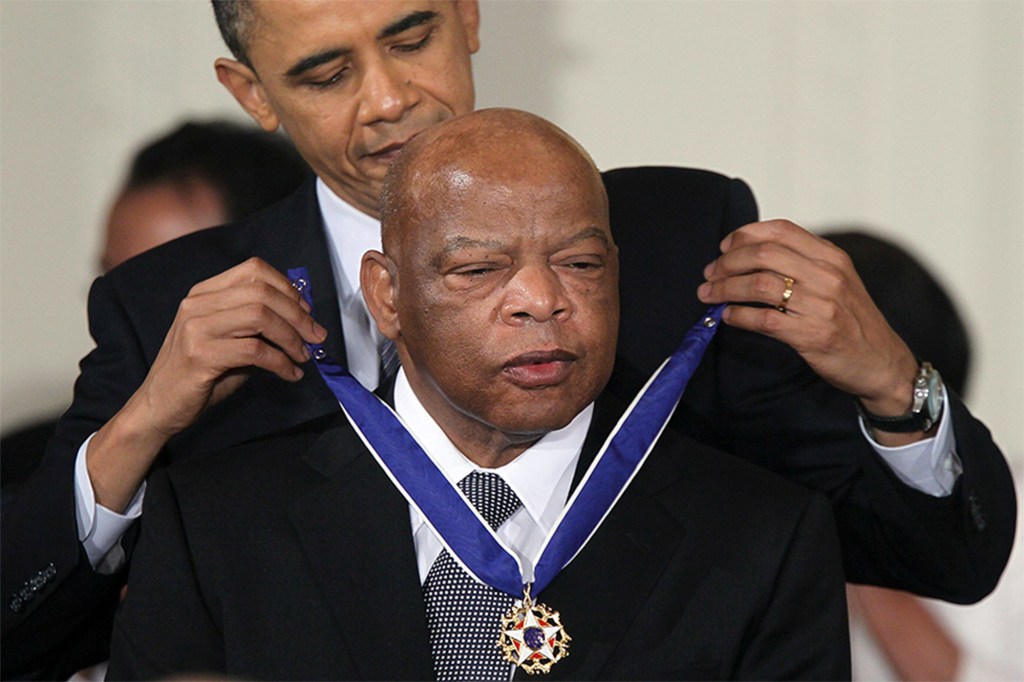 A masseuse claims to have given several entirely non-sexual massages…

Lewis, who was mentored by King, once recalled the civil rights leader’s “great sense of humor.”

“He would tease and mock individuals all the time,” Lewis told The Post in 2017, during the Gordon Parks Foundation Awards.

“On one occasion, we were riding in a car in Mississippi and we saw this old restaurant — a small hole-in-the-wall,” said the veteran activist.

“Martin said we should stop, get arrested, and we would go to jail on a full stomach. We all started to laugh.”

Lewis had remained active in politics throughout the spring.

In April, he endorsed Joe Biden’s bid for the presidency, telling reporters, “It is my belief that we need Joe Biden now more than ever before.”

He said in a statement at the time, “I have stared down the deepest, and darkest forces in this nation.

“Vice President Joe Biden and I both believe that we are in a fight to redeem the soul of America.

“I know Joe Biden as a man of character and dignity — a man who can not, and will not rest when he sees injustice in our American home.”

10 Backyard Birthday Ideas For Your Mom Who's A True Queen

Mon Aug 10 , 2020
If your mom is your bestie, you’d do everything in your power to show how much you appreciate her — especially on her birthday. Showering her with all that love means putting together a fabulous plan for the occasion. You already have the perfect location right at home, and these […] 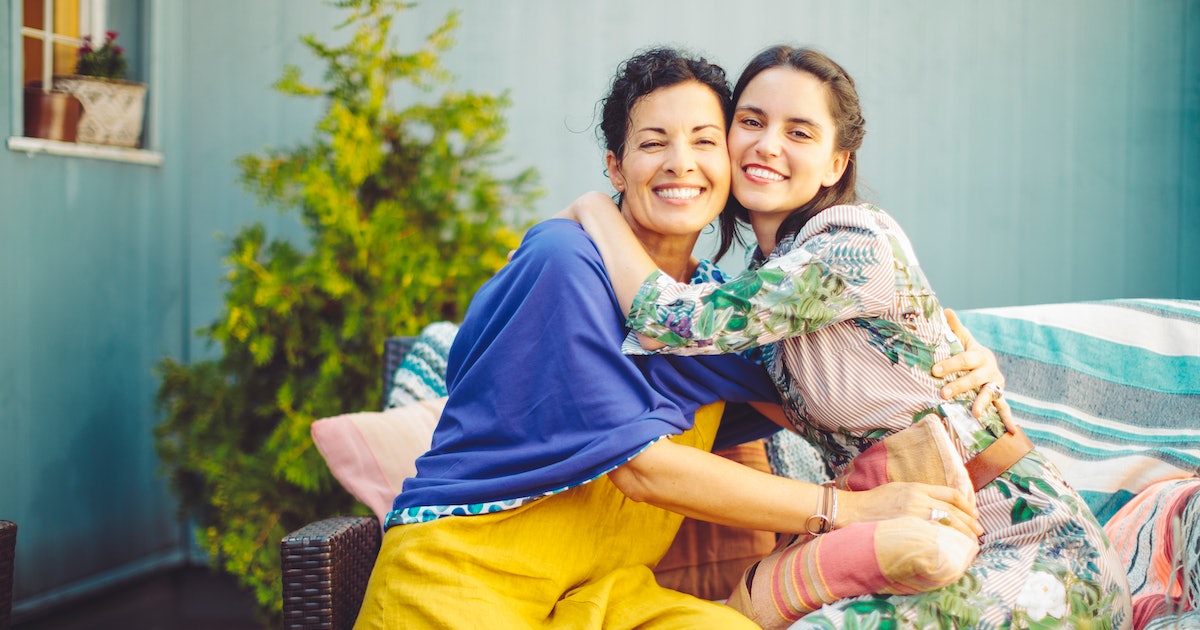