The industry’s return to office life, by contrast, has been shambolic.

The Midtown Manhattan offices of Mudrick Capital, a hedge fund, never closed, but workers were required to return only after Labor Day. Across town, the offices of a fellow hedge fund, Pershing Square, remain shut, its trading terminals idle and rooftop tennis court unused since spring. JPMorgan Chase, one of the city’s largest private employers, recently asked some senior staff in its markets division to come back starting this week. Other banks have been slower, with Goldman Sachs and Citigroup calling back more workers beginning next month.

“Covid is effectively gone from New York,” said Jason Mudrick, who runs Mudrick Capital, explaining why he sees little reason to keep his 26 employees home. “I personally think that all my hedge fund colleagues who are not coming back until later are just taking it as an excuse to have a long summer vacation.”

The fitful nature of the finance industry’s return highlights how the waning threat of the coronavirus in New York — at least for now — has done little to reduce uncertainty around when things will return to normal. With governmental guidance remaining nebulous, many Wall Street firms have made up return-to-office policies that reflect their business and their leaders’ philosophies.

Large banks, where face time and long hours are considered virtues, are generally urging workers to come back. Many hedge funds, which attract more seasoned workers who can afford sophisticated workstations at home, are not. Private-equity firms and asset managers, which have a mix of workers and deal with both long- and short-term investments, appear to be taking a middle path.

“There’s a recognition happening that you don’t have to be in the office every day, so people are looking at more quality-of-life arrangements,” said Kevin Russell, the chief investment officer of UBS O’Connor, a hedge fund that operates within the large Swiss bank. Mr. Russell has been working from home since the outbreak started, and recently permitted a longtime Chicago-based employee to relocate to a home office in Florida indefinitely.

For the most part, though, the finance industry in New York City — which employs around 350,000 people — has embraced caution. Just 8 percent of the city’s 1.2 million office workers returned this summer, according to the Partnership for New York City. The nonprofit estimates that since August, the number has ticked up to no more than 15 percent.

Banks and other firms bringing back workers have to weigh the risk of exposing them to a potentially deadly illness against worries that working from home long term will erode office culture. Both JPMorgan and Goldman recently ushered back hundreds of employees, only to have to send some of them home after new cases of the virus emerged among workers. Adding to the chaos: On Tuesday, the British government, in the grip of a second wave of the coronavirus, told office workers to work from home if they could, a policy reversal that forced banks and other employers to readjust their corporate policies on the fly.

Jamie Dimon, the chief executive of JPMorgan, who returned to the office this summer after recovering from emergency heart surgery, recently warned that prolonged remote work could lead to drug abuse or worse.

“Going back to work is a good thing,” Mr. Dimon said at a virtual investment conference last week. “You can create more deaths from depression, overdose if we’re not real careful and manage those things.”

JPMorgan has been at the vanguard of Wall Street’s return-to-office movement. Shortly after Labor Day, senior markets-division executives asked senior managers — who amount to roughly 10 percent of that unit’s work force — to return to their Manhattan and London offices on a staggered, one-week-in, one-week-at-home basis, starting Sept. 21.

Their mandate attracted the notice of President Trump. “Congratulations to JPMorgan Chase for ordering everyone BACK TO OFFICE on September 21st,” he wrote on Twitter, misstating the breadth of the recall. “Will always be better than working from home!”

In a recent town hall, David M. Solomon, the chief executive of Goldman Sachs — where about 1,200 of the usual 8,000 workers are now back in its downtown Manhattan tower — told employees that it was a challenging environment to work in.

“It’s complicated, and it’s different for everybody,” Mr. Solomon said, according to a transcript. “People have different obligations. I’d really like to encourage people to try to spend some time in office, and try it out.”

At Citi, 30 percent of the bank’s 17,500 New York-area employees are set to return by Oct. 5, but the chief executive, Michael Corbat, has decided to continue operating from his home near Jackson, Wyo., where he has been based since March. (A spokesman said he planned to return in the coming weeks.) Bank of America, which earlier drew criticism for pressuring some employees to go to the office, has discussed having some senior managers return on Oct. 21. Morgan Stanley’s chief executive, James Gorman, has also encouraged senior employees to visit the office at least once to check out the new safety protocols. But Deutsche Bank has told employees that they can work remotely until sometime next year.

At the peak of New York’s virus outbreak, Mr. Mudrick shared his fund’s 14,000-square-foot space on Madison Avenue with just one other employee — his analyst Matt Pietroforte. The market meltdown presented enough fresh opportunities that Mr. Mudrick, who invests in distressed debt, felt he could work best from the office. Once the infection rates in New York fell, other colleagues returned.

Mr. Mudrick installed devices to gauge body temperatures. He forbade the use of public transportation, covering everyone’s travel to and from the office. Only one person was allowed to use the bathroom at a time. To avoid conference-room gatherings, employees used videoconference technology from their personal offices. Even so, some employees, including one who was pregnant, asked to continue working from home, to which Mr. Mudrick agreed.

Pershing Square, the 36-person hedge fund run by the billionaire investor William Ackman, has done the opposite. Mr. Ackman’s team is fanned out across the country in apartments, beach houses and rental homes, using replicas of the workstations in their offices on the west side of Manhattan to analyze and trade investments.

Like other hedge funds, including Mr. Russell’s UBS O’Connor, Pershing Square has set no timetable for return. Carlyle Group, the private equity fund, has barred people from its Midtown office, mostly to save them the trouble of moving twice, because the firm is planning to move to a new office next year.

Some finance workers say they have been reinvigorated by their return to the office. Jamie Iselin, the head of municipal bond investing at Neuberger Berman, a money manager, has been going to work a few days a week since July. He usually walks the 30 blocks from his Upper East Side apartment to 51st Street and the Avenue of the Americas.

Neuberger has told its roughly 1,400 employees that the firm will wait and see how the fall progresses, but about 10 percent of the workers have volunteered to return. Mr. Iselin’s nearest colleague sits about 20 feet from his 27th-floor trading desk. He has enjoyed chatting with co-workers about market events, like Delta’s plan, announced this month, for a $6.5 billion bond offering backed by its frequent flier program. Walking a few blocks around the office at lunchtime with two colleagues to talk shop provided some inspiration for trading.

“We caught up on our view of markets,” Mr. Iselin said. “For me it’s been really, really helpful. Those things drip down and help inform trade decisions.”

Blackstone, the private equity giant, has encouraged some workers to come in, while asking others to stay home. It is monitoring any potential spread of the virus through a contact-tracing program and saliva tests that employees are required to clear before going to the office each Monday morning.

Anushka Sunder, a senior health care and technology investor at Blackstone, began working partial weeks in the office this month. Meeting in person with colleagues from Blackstone’s investment team to hash out a new investment opportunity — with direct eye contact — was a welcome return to past practice, she said. To socially distance, the team meeting was spread out over several conference rooms and also used Zoom, but “it was more efficient and more fun.”

“Your day ends up being less over-programmed and over-scheduled,” Ms. Sunder said, “because you’re able to have the two-minute conversation rather than the 30-minute Zoom call.”

Wed Sep 23 , 2020
@beataheuman In order to see this embed, you must give consent to Social Media cookies. Open my cookie preferences. Interior architect and product designer Beata Heuman got her start working for Nicky Haslam. She now has a style all of her own, with a penchant for warm colours, bold prints […] 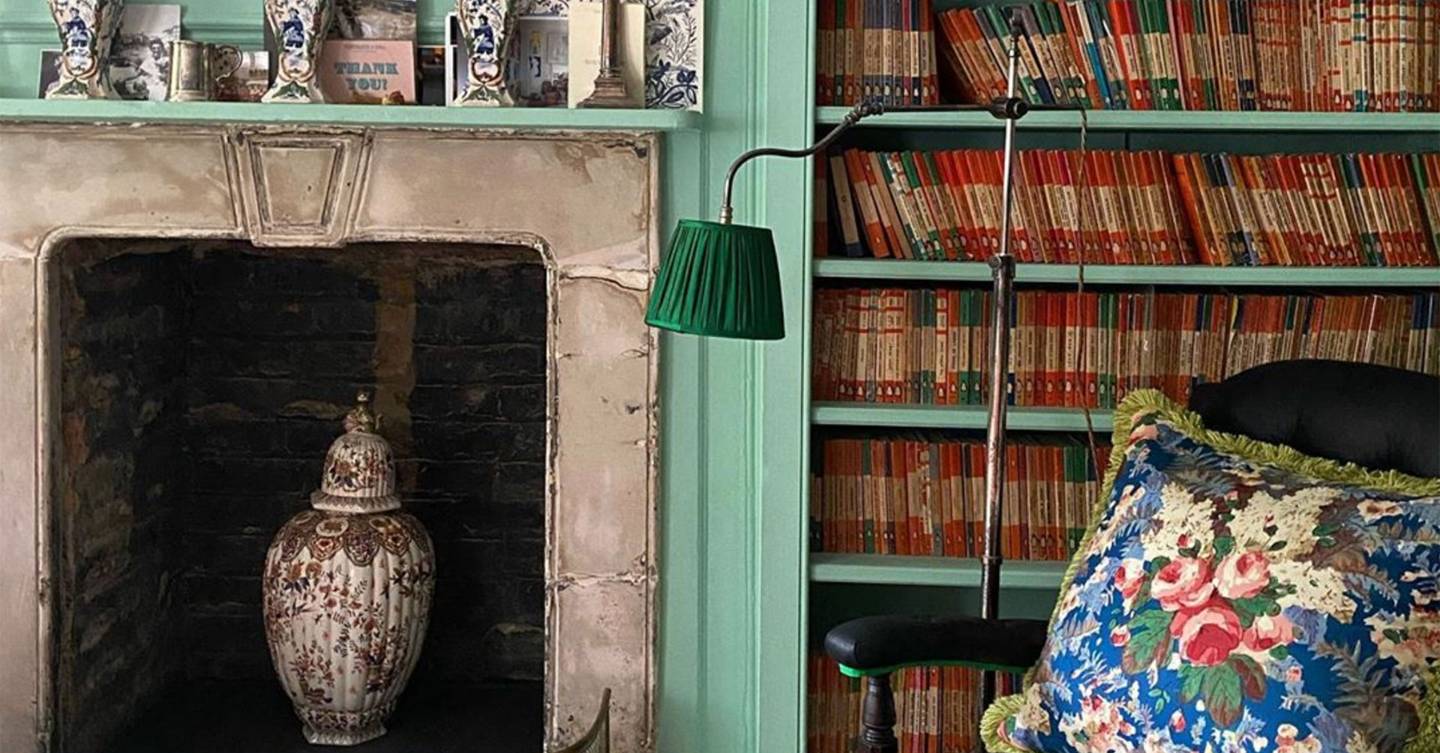