The actress put her bright pink house, which she bought in 2016, on the market on Monday, asking $2.55 million.

The super unique home – which features vividly decorated interior walls with expansive graphics – is a comfortably large 4,500 sq ft and is gated for extra security. 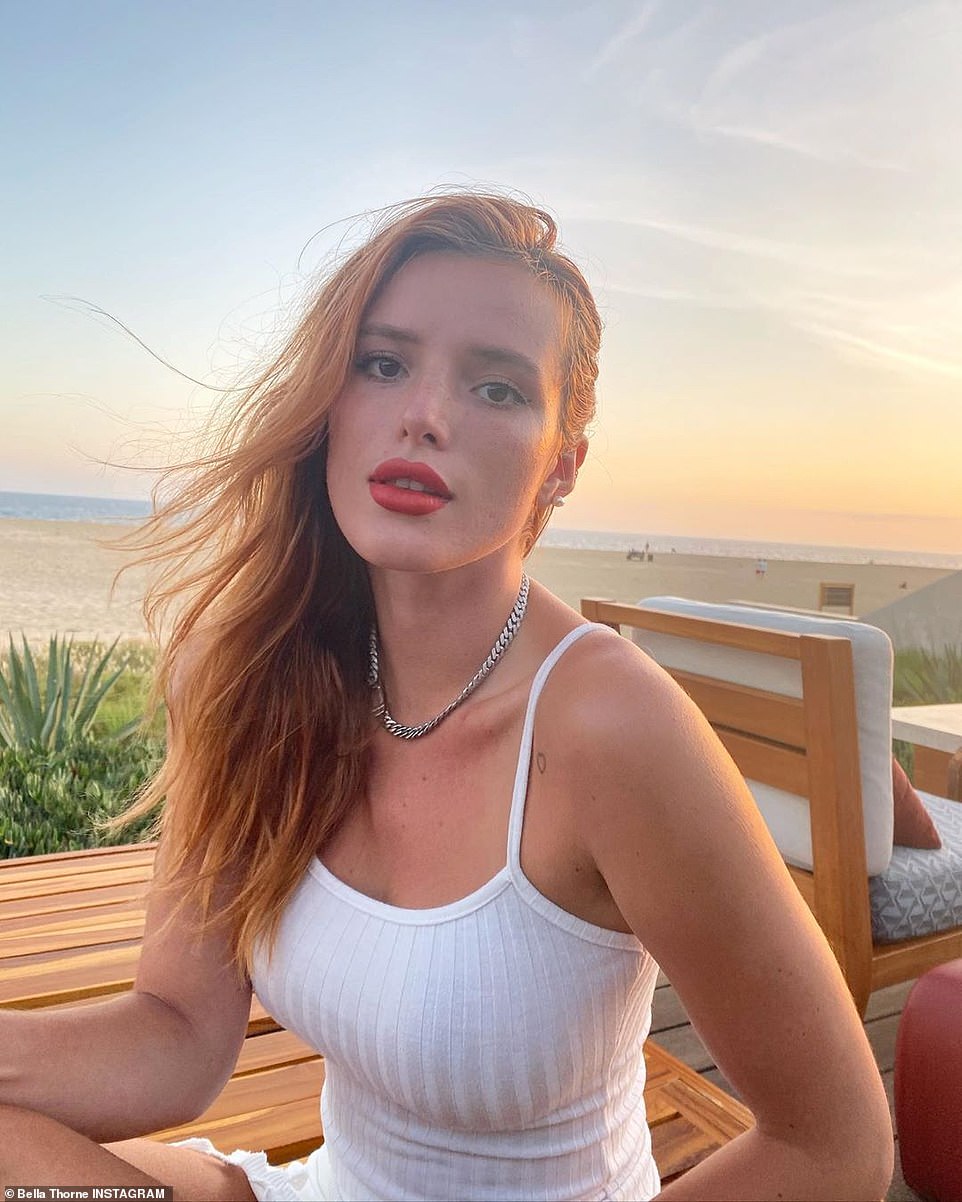 Bella Thorne is selling her LA property for $2.55M. The bold pink house was put on the market on Monday 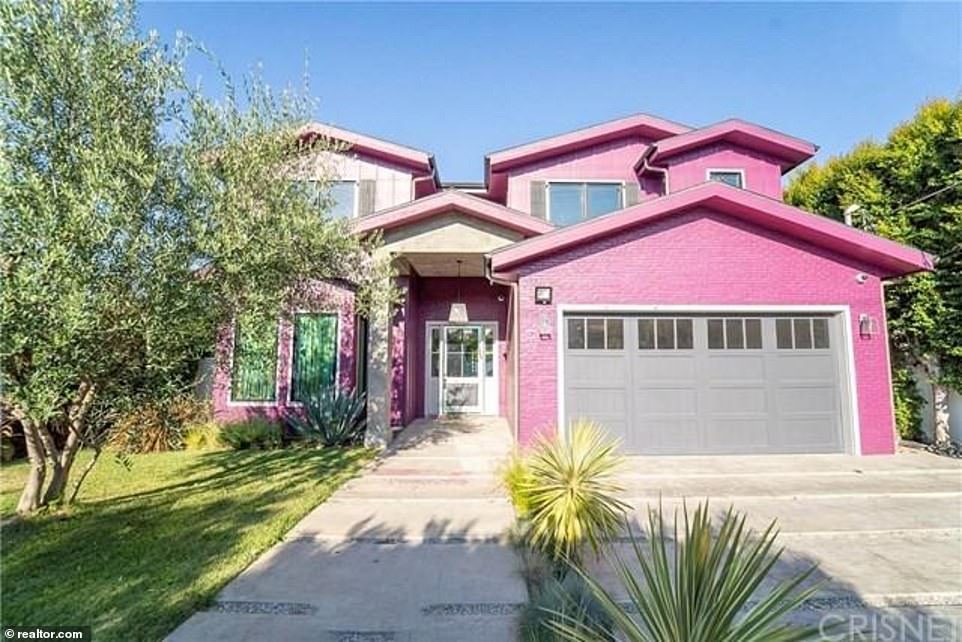 Upon entering the property guests are greeted by a rainbow-hued staircase and a massive mural running up the two-story wall.

Bella’s bedroom is also a work of art as it features a bathroom covered in ivy and a huge walk-in closet.

The closet has a patterned plum ceiling and central island covered in red fur.

Another room is covered in roses with a chair that hangs from the ceiling.

Compared to the rest of the property the backyard has a minimalist contemporary feel with lush lawn, swimming pool, spa and a built-in grill. 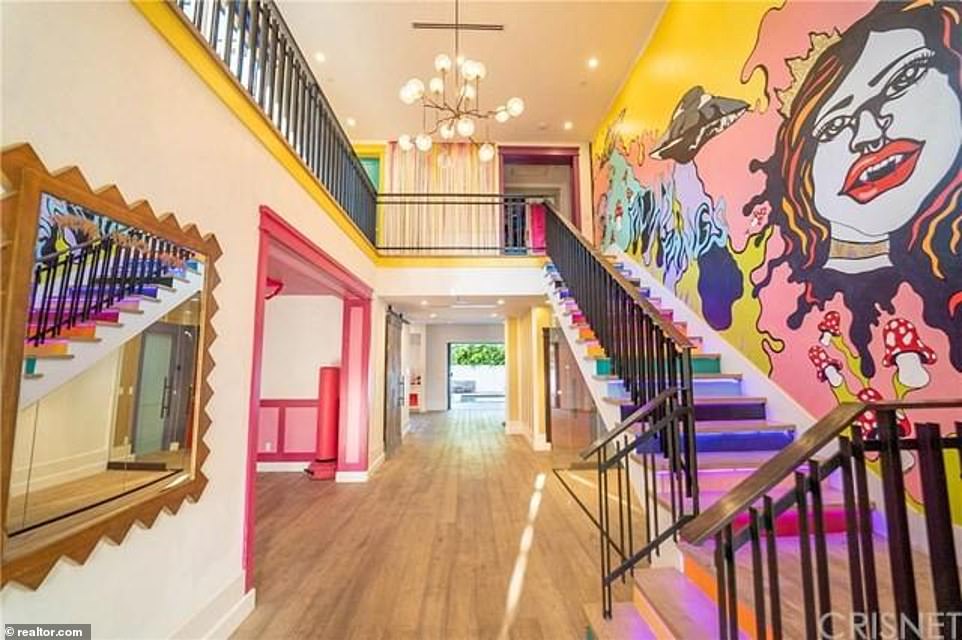 Eye-catching: The staircase is rainbow hued with bright yellow and pink trims separating each area 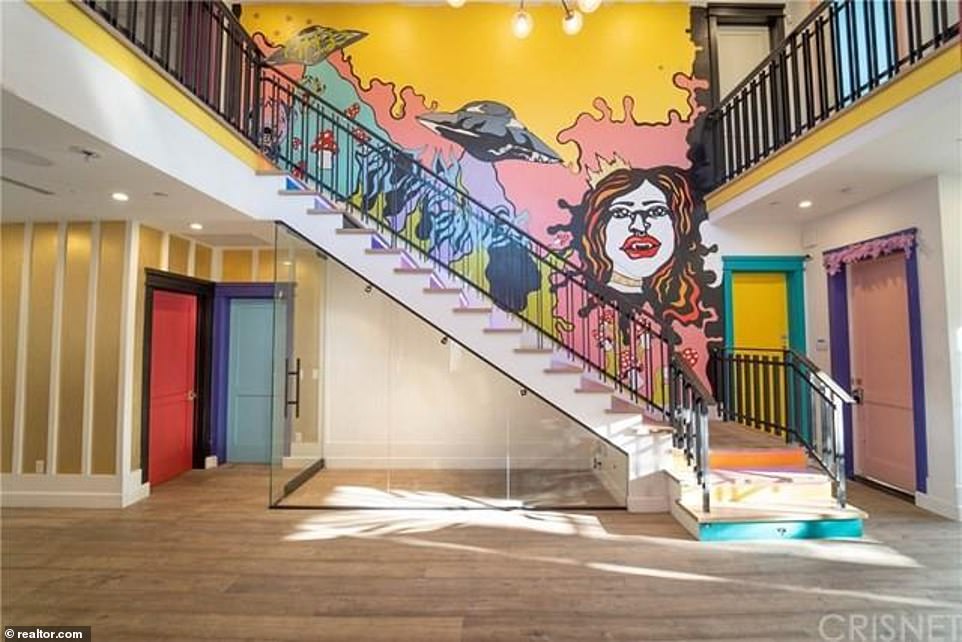 Not for everyone: The entryway features a massive mural running up the two-story wall 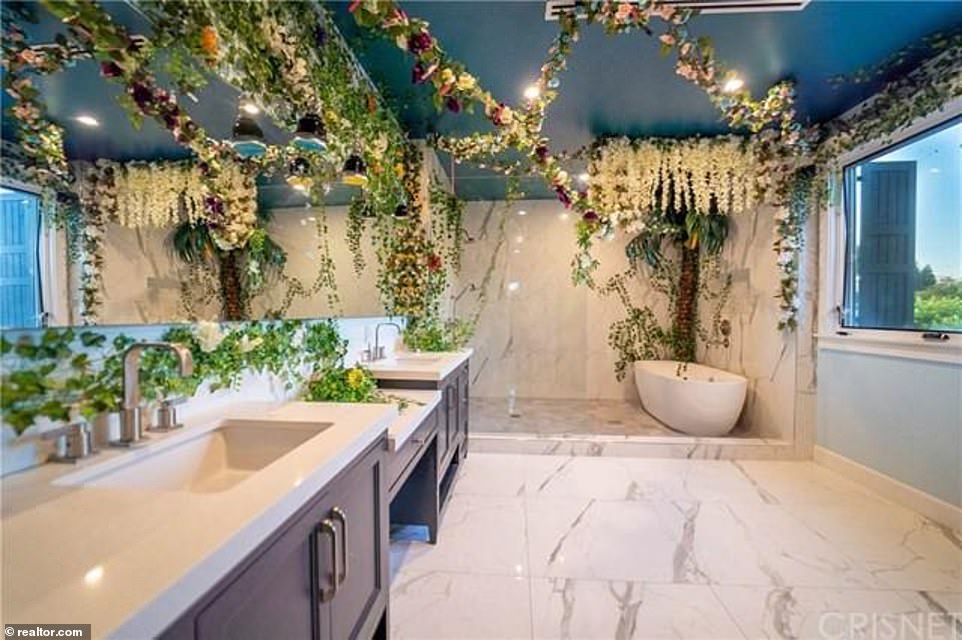 Wow factor: Bella’s bedroom is also a work of art as it features a bathroom covered in ivy and a huge walk-in closet

There is also apparently a ‘barn door with wine rack room’ which is supposedly an ‘art piece on its own’ but unfortunately it’s not pictured on the listing.

Over the past year she has been renting out the property, which she has dubbed the ‘Trippy Twins Fun House,’ for parties and photoshoots as well as giving guided tours of the property for $50.

This summer however she let TikTok star Rachel Turner live there before heading off to university in the fall.

Last month Rachel filmed a TikTok video showing fans some of the stuff Bella left behind when she moved out. 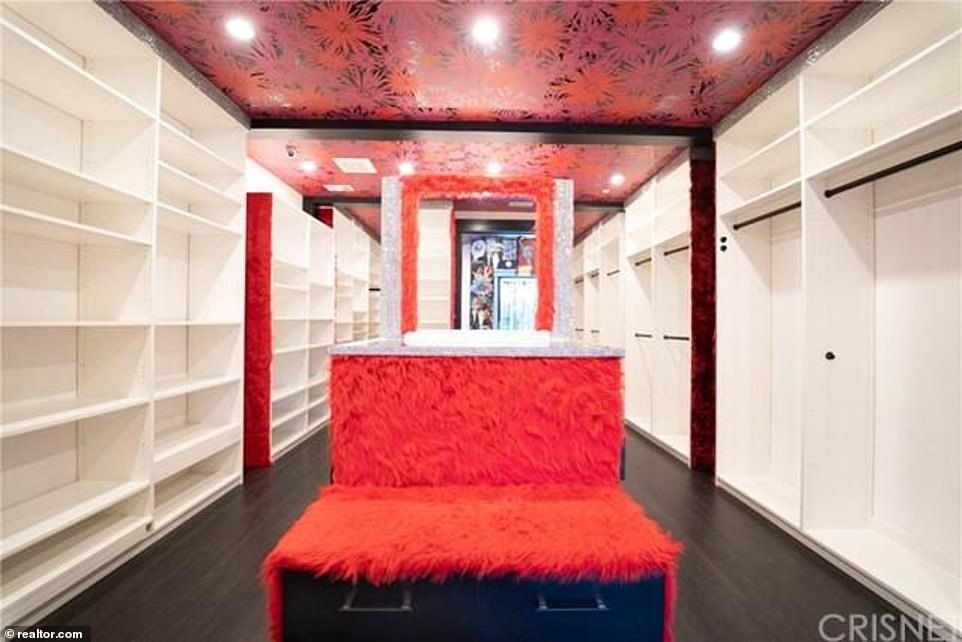 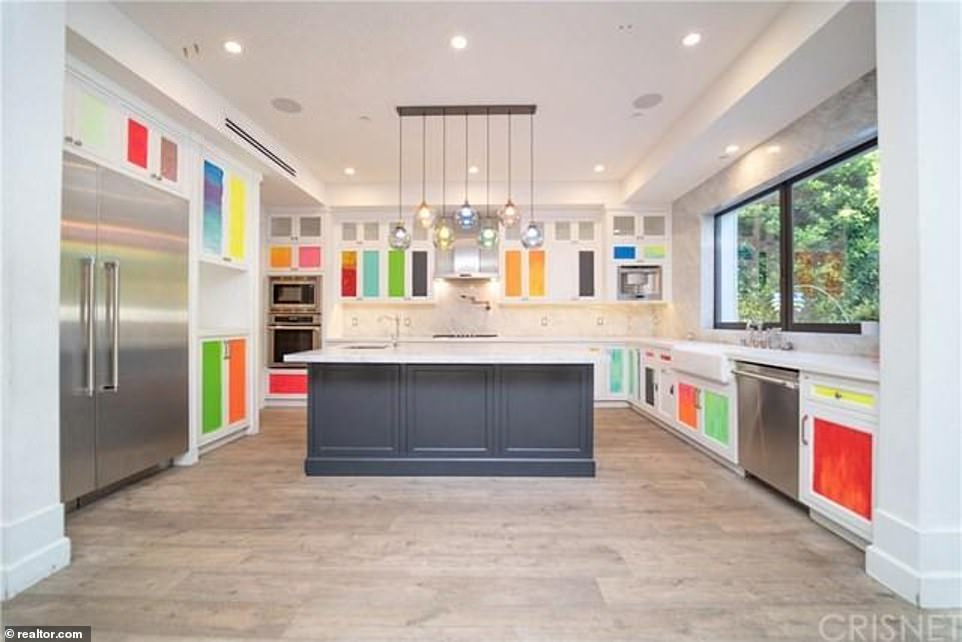 Bright and bold: The kitchen has a multi-color theme too 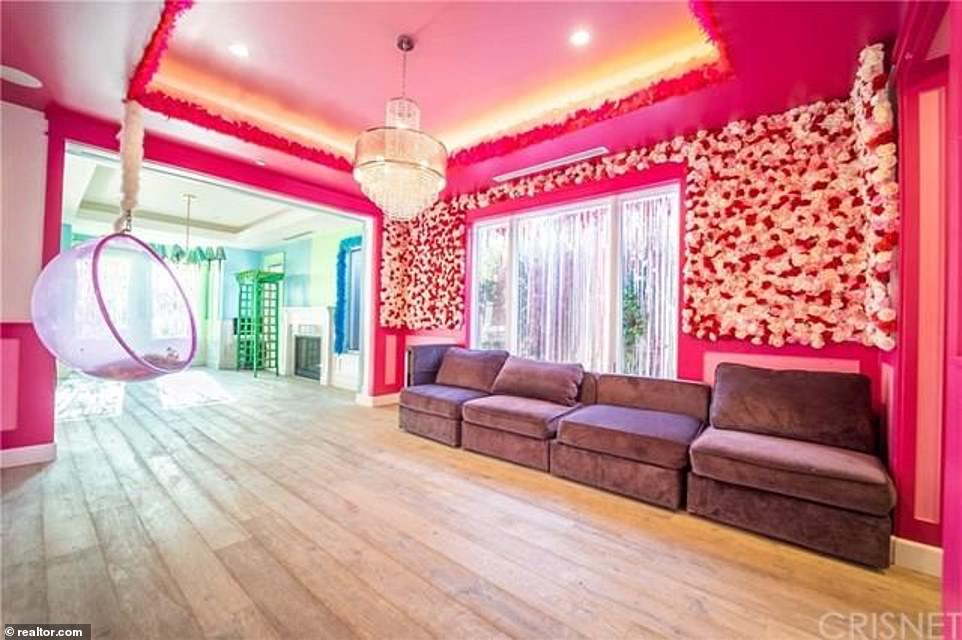 Zany: Another room is covered in roses with a chair that hangs from the ceiling

Rachel goes on to reveal that Bella also ‘left an entire garage full of stuff’ that is stacked in messy piles that nearly reach the ceiling. In one area of the garage, she has posters from her Freeform drama Famous in Love.

‘She also left her Teen Choice Award just under a bunch of stuff in the garage, so we decided to frame it and put it up,’ Rachel says of the surfboard the actress took home after winning ‘Choice Movie Villain’ in 2015 for her role in The Duff. 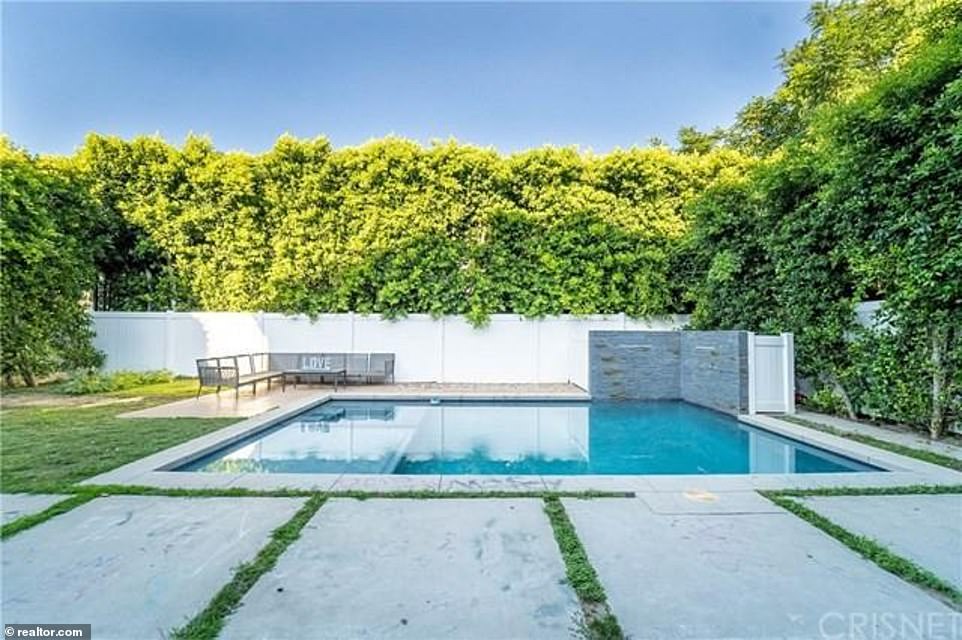 Perfect for parties: The backyard looks pretty contemporary with a pool and lush lawn, swimming pool and spa, with a built-in grill 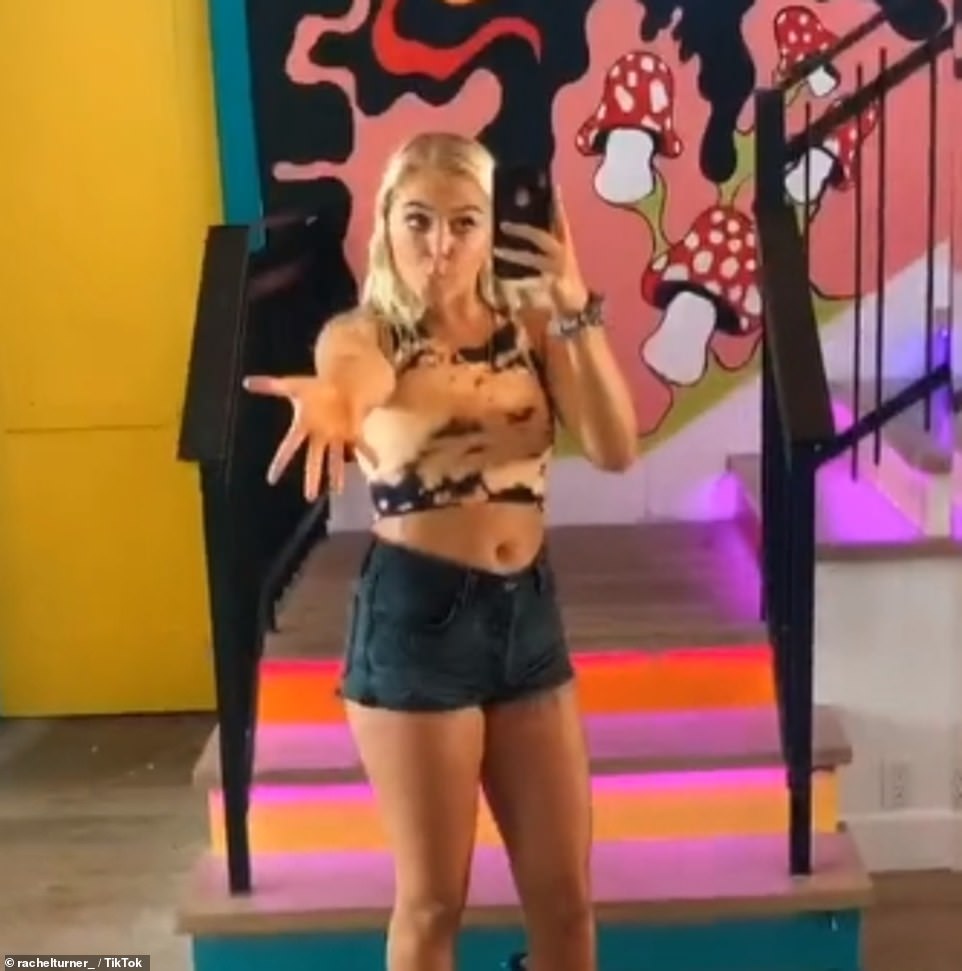 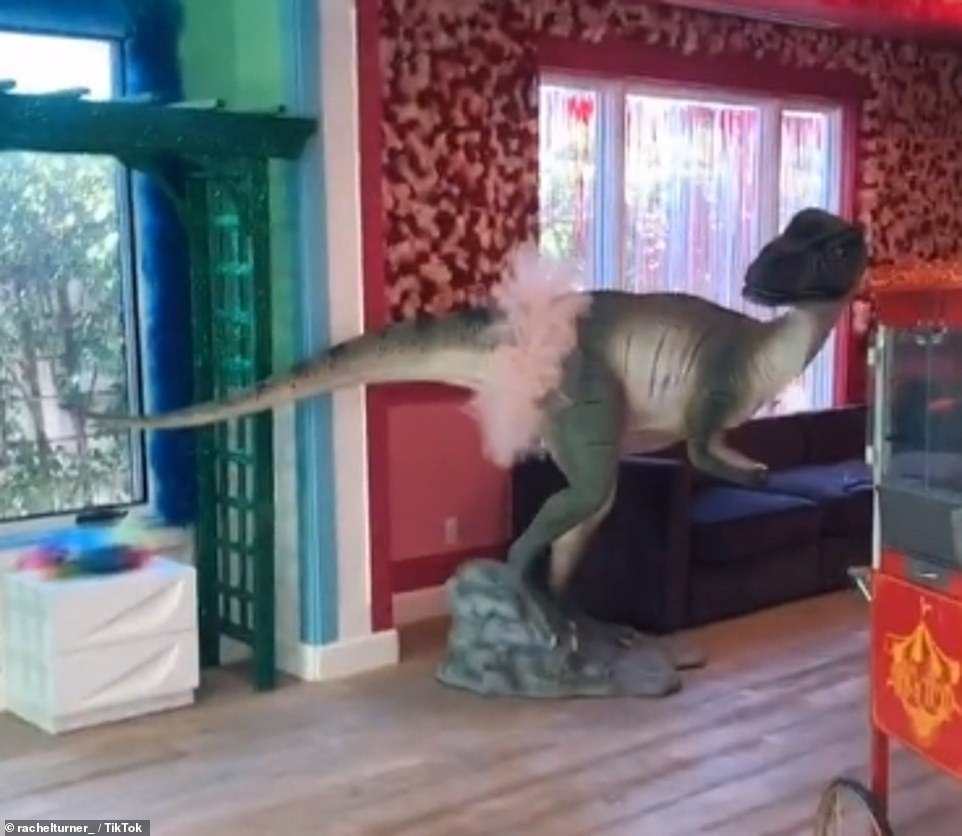 Original decor: Rachel, who has more than 450,000 TikTok followers, gave a video tour last month of the one-of-a-kind pad last week, pointing out all the stuff Bella, 22, had left behind 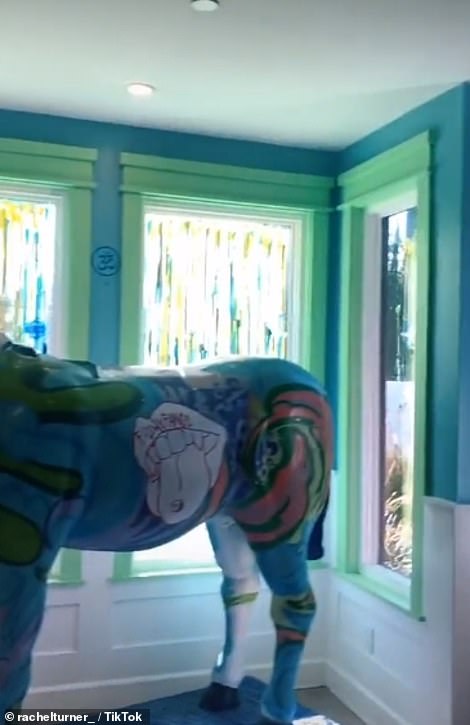 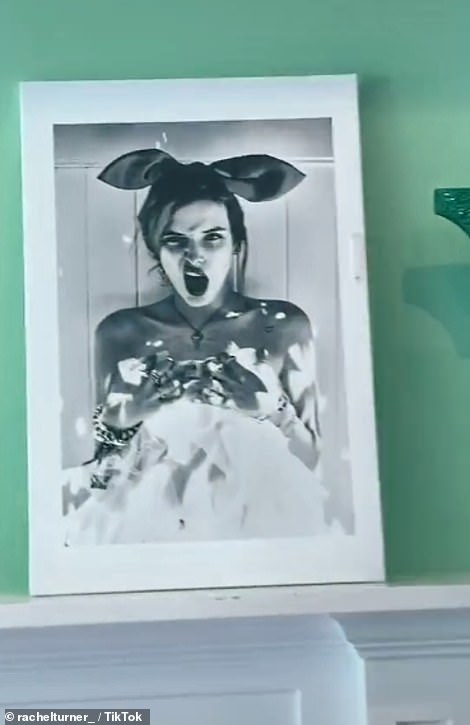 Hard to miss: Bella’s tutu-wearing dinosaur and unicorn statues are still in the living room along with framed photos of the former Disney star

‘I honestly don’t know why, so don’t keep asking. I guess she just didn’t want it anymore or maybe she does? I dunno.

She’s still our landlord, so she comes by every once in a while to check on the house,’ she notes. ‘I’m going to ask her next time she comes by.’

Before turning it into a rental property, Bella lived in the bachelorette pad with Dani, 27, and decorated it to fit their funky aesthetic.

The property was featured on MTV’s Cribs in October 2018 and also got a write-up from Architectural Digest earlier that year.

Tue Aug 4 , 2020
ASHBURN, VA — This beautiful four-level home in Ashburn boasts six bedrooms and 4.5 baths. The home comes with upgraded hardwood floors in the foyer that extend into the kitchen and on the stairs to the second level. Just off the foyer are the living and dining rooms, which feature […] 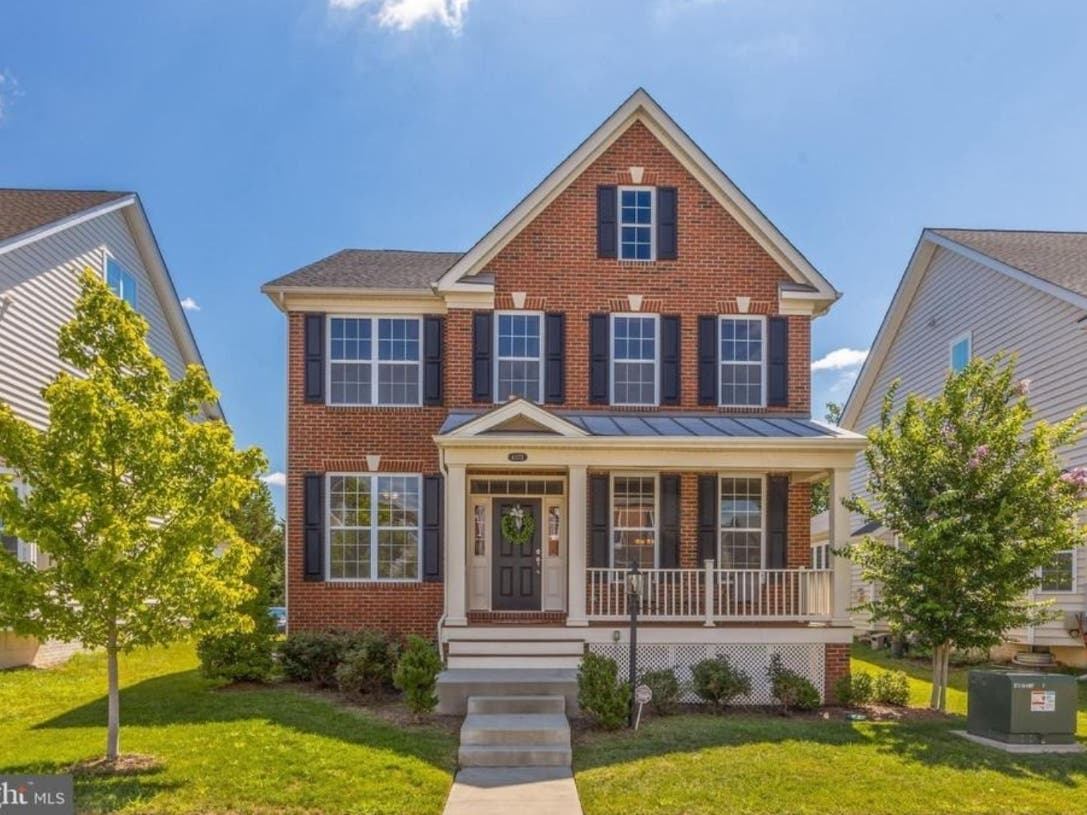