The major indices have tried up. They’ve tried down. And today it looks like they’re going to try opening flat.

It’s been one of those weeks where direction is hard to define. Monday’s rally turned into Tuesday’s selloff, ending a five-day win streak for the S&P 500 Index (SPX). This kind of choppy, directionless, low-volume action could continue throughout the next few days as investors await the start of earnings season next week.

Could overseas markets provide inspiration, the way they did earlier this week? Mayne not. The picture looks a bit cloudy with European stock indices in the red and Asian indices, other than Japan, glowing a nice shade of green.

Shanghai stocks are on a pretty amazing run, up almost 8% so far this week. There’s good things coming out of there, but remember, we’re behind them now. As they talk of coming out of the virus situation, the U.S. just had its biggest day of cases. At some point, the hope is that the U.S. can follow in China’s direction as far as caseloads.

Crude continues to hang in there, holding $40 a barrel. Meanwhile, gold got back in the saddle today and topped $1,800 an ounce. That’s not too far from a nine-year high and might reinforce the fact that many investors remain worried about the global economy.

Though Wednesday begins with less than a bang and Tuesday ended with a whimper, it’s hard to give up on the week considering how resilient major indices have been. A lot could depend on the “mega-cap” $1 trillion behemoths in the coming days, as companies like Apple (AAPL), Microsoft (MSFT), and Amazon (AMZN) all have so much influence on the market.

Keep in mind, though, that the mega-caps can sometimes mislead. The largest stocks by capitalization are generally way ahead of the rest of the market as far as 2020 performance, meaning the major indices can get distorted by the heavyweights.

Despite all the negative sentiment lingering from Tuesday, remember what we said earlier this week: The market remains very reliant on the latest headline. Yesterday, the bad news from United (UAL) might have been enough to put an arrow through the indices. Today, who knows what headlines might pop up and possibly send things in another direction.

In the old days, a “bad travel day” was one where you missed a connecting flight or got stuck in a middle seat for six hours.

In these COVID-19 times, however, a bad travel day is one like Tuesday. Boeing (BA) shares crumbled, weighing on the Dow Jones Industrial Average ($DJI), and the airlines took a blow from UAL warning of lower bookings and employee furloughs. Shares of UAL tumbled nearly 8%, and other airlines also got hammered.

When you look at tens of thousands of employees possibly being furloughed, there’s no way to spin it as good news. Just a few weeks ago, airlines were talking about adding more flights and bookings picking up. What might be hurting the airlines now are these 14-day quarantines being put in place by some cities and states. People don’t want to travel if it means they might face being stuck in a hotel room or in someone’s house for 14 days once they arrive.

The challenge around these different rules in different states faced by the airlines is just part of a larger challenge for anyone trying to grasp the state of the entire U.S. economy. Each state has its own set of qualifications and facts on the ground, so to speak. If business picks up in four or five states, does that mean anything for the rest of the country?

Probably not, because for every state that starts to get back on its feet, another state goes the opposite way. And many, if not most, states, are losing the tourist element they depend on so much every summer. How many visitors are going to, say, Alaska, this year? With the cruise industry in dry dock, it’s fair to say probably not many.

Speaking of cruises, that was another sector facing turbulent waters Tuesday. Carnival Corp (NYSE: CCL) and Royal Caribbean Cruises Ltd (NYSE: RCL) shares both ran aground as the cruise industry continues to face delays getting back to the high seas. This is a sector that saw some buying interest in June, but at least on Tuesday a lot of investors seemed less prone to embracing risk.

You could also see that risk aversion in the performance of the bond market Tuesday, where yields finished near their lows after plunging about five basis points on the day for the 10-year Treasury. It’s now been a month since that little yield rally we saw in early June that took the 10-year yield up to 0.9%, and it seems like a long time ago. The way the bond market rallied heavily into its close Tuesday is actually a bit worrisome, because it could hint at more risk aversion heading into today.

Another worrisome thing was seeing longer-term yields decline more than shorter-term ones on Tuesday. This kind of action means the yield curve got flatter, typically a sign of economic slowdown. However, one day isn’t a trend.

Major indices, like bond yields, finished Tuesday near their lows for the session as cyclical sectors saw the worst of it, meaning there’s a weak tone heading into Wednesday. There’s some sentiment that Monday’s buying got overdone, especially when the S&P 500 Index (SPX) started getting in sight of its post-pandemic highs above 3200. The slip below 3150 at the close Tuesday was technically a weak way to finish, and sets up a possible test of more support around 3130 today if selling continues.

As if there weren’t already enough on investors’ minds, an old nemesis re-emerged in the headlines today: Brexit. Yep, that hasn’t gone away. European newspapers reported today that the United Kingdom won’t make a trade deal with the European Union if the EU isn’t willing to compromise, British Prime Minister Boris Johnson reportedly told German Chancellor Angela Merkel on Tuesday. In other words, it’s the threat of a “no-deal” Brexit rearing its head again.

Then there was some sad news from the corporate world as Brooks Brothers filed for bankruptcy more than 200 years after being founded. It’s a victim of coronavirus and “casual Fridays,” media reports said.

CHART OF THE DAY: TOUGH QUARTER FOR BANKS: This three month chart compares the S&P 500 Financial sector (IXM—purple line) to the S&P 500 Information Technology sector (IXR-candlestick). It’s easy to see here that banks were gaining some ground about a month ago but couldn’t keep up the pace even as tech continued to charge higher. Data Source: S&P Dow Jones Indices. Chart source: The thinkorswim® platform from TD Ameritrade. For illustrative purposes only. Past performance does not guarantee future results.

Transports Diverge: One interesting thing noted on CNBC yesterday is that even though airline stocks have been getting pounded, other transport stocks haven’t done that badly lately. FedEx Corporation (NYSFDX) and JB Hunt Transportation Services Inc (NASDAQ: JBHT)—both members of the Dow Jones Transportation Average ($DJT)—actually gained on Tuesday.

What could this dichotomy tell us? Maybe that people aren’t taking flights to Alaska, but still are ordering enough goods to keep the delivery companies busy. Stronger demand for transportation services could speak to decent consumer demand, and one company that might have some insight is Bed, Bath & Beyond Inc (NASDABBBY), which is scheduled to report earnings this afternoon.

Also consider keeping an eye out tomorrow morning for earnings from Walgreens Boots Alliance Inc (NASDAQ: WBA), as well as the closely watched initial weekly unemployment claims that come out early Thursday. Analysts expect initial claims to total 1.35 million, down from 1.43 million the prior week, according to research firm Briefing.com. Any improvement in this leading indicator could put a tailwind behind the market, while an uptick in claims might form a headwind. Stay tuned.

Guessing Game: It’s that time when prognosticators put out their best guesses on how the biggest companies performed in the latest quarter. FactSet last week pegged the Q2 earnings decline for S&P 500 firms at a dramatic 43.8%, with all 11 sectors seen slipping year-over-year. That’s pretty terrible, but not as bad as Q4 2008 when earnings plummeted 69%. What makes it a little tough for analysts this time around is the lack of guidance from so many companies due to coronavirus concerns. Only 49 S&P 500 companies have issued guidance so far, down from the 106 normally seen by this date, FactSet said.

The worst sector performers in Q2 could be Energy, Consumer Discretionary, Industrials, and Financials, FactSet said. Those sectors correspond to some extent with the businesses hit worst by shutdowns during coronavirus. Research firm CFRA is even more pessimistic about overall earnings prospects, putting average losses for the S&P 500 at 45.7%. It sees the same “worst three” but thinks Real Estate will shove aside Financials to be the fourth on the list no one wants to be on.

Remember that these estimates get updated constantly as earnings season advances and companies (maybe) deliver some guidance. So, it’s extra important to keep an eye on the numbers in coming weeks. We’ll continue providing updates here.

Investors See Resilience: One possible lesson to take away from the June TD Ameritrade Investor Movement Index® (IMXSM) is that the market remains resilient because many investors still believe in this economy.  Since a 6% pounding on June 11 that wiped out $1.6 trillion in value, the SPX was up 6% through Monday. Consumer Discretionary and Info Tech shares topped the scorecard, jumping at least 9%.

Looking over the IMX data, it appears the June dip was met with buying, not with fear. Retail investors tracked by the IMX seem to believe domestically things will start to return. Domestic travel and the domestic economy have a chance to start to return to more normal levels. That’s the hope, anyway. It’s still playing out day by day, with plenty of chances for more hiccups as the virus doesn’t appear to be going anywhere. Will these enthusiastic investors reap more rewards in coming weeks from jumping back in, and will future dips get met with more buying? The jury is still out. The IMX is TD Ameritrade’s proprietary, behavior-based index, aggregating Main Street investor positions and activity to measure what investors actually were doing and how they were positioned in the markets.

© 2020 Benzinga.com. Benzinga does not provide investment advice. All rights reserved.

Sat Jul 25 , 2020
Posted at 16:14 on 3rd July 2020 in Good News A Bath PCSO has been using his artistic talents to boost team morale during lockdown by creating a series of oil portraits of his colleagues. PCSO Mark Trueman, of the Bath city centre beat team, was inspired by a fellow […] 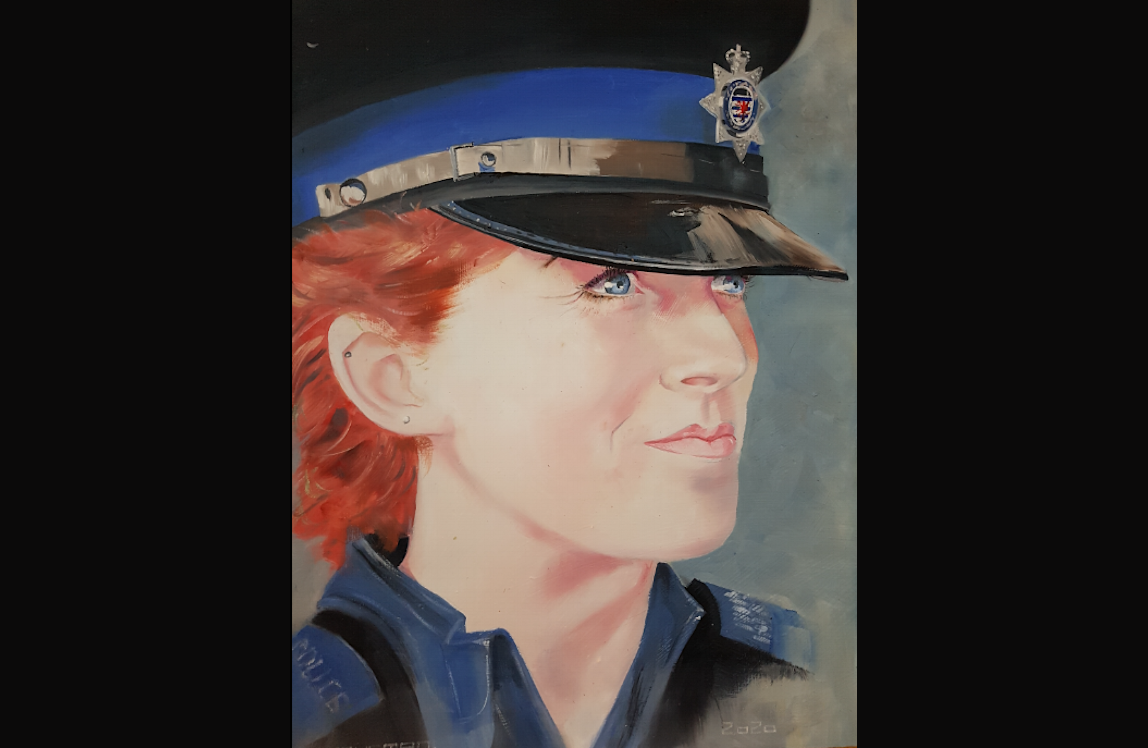